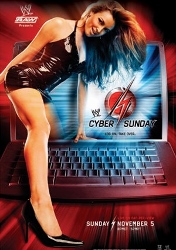 It’s about that time again, your weekly dose of wrestling’s past: Throwback Thursday. November 6 is a little bit of a blank day in terms of far-reaching history, but is also filled to the brim for events from the last 20 years. This includes the beginning of Jerry Lawler’s third USWA Unified Heavyweight Championship reign, Jerry Lynn defeating AJ Styles to begin his second X-Division Championship reign, and AAA’s first North American pay-per-view event which many critics call the best pay-per-view ever.

However, of the potentially great moments from this day—maybe not ECW’s Layla El vs. Kelly Kelly so much—we are once again faced with our old enemy: The WWE Network. Due to the limited content, we will stick close to this date and look back to November 5, 2006 when WWE held its third annual interactive event: Cyber Sunday.

If I were to keep this short and simple, I would simply say that this event was simply average. However, for the sake of content and analysis, come with me as we delve into the time of so much potential and zero payoff.

For starters, let’s look at the tag team matches. The first of the three tag matches featured four promising tag teams who essentially had to brawl for four-and-a-half minutes and receive nothing more than a W or L in the results column. The third of the three tag matches featured five up-and-comers—only one of whom ended up having a wrestling career—defending their tag titles against two fossils who were teaming up for the first time. If the first of these two matches had been for the tag titles, I don’t think I would have minded. Unfortunately, this was a clear illustration of where WWE’s tag division was headed.

Granted, Rated-RKO defeating DX was a nice touch, a passing of the torch if you will, but one out of three is not a great statistic. But speaking of DX, if you don’t watch this pay-per-view for anything else, it is worth watching all two-and-a-half hours for one segment: DX Doesn’t Know Controversy feat. Stan and the Superkicks.

Beyond these tag team bouts, the three singles matches and the triple threat finale were all quite forgettable. Umaga and Kane were never going to put on a showstopper, Jeff Hardy and Carlito never really gelled in their match, Lita and Mickie James were definitely held back by the lumberjack stipulation, and the triple threat concluded with the interference of Kevin Federline. I think there’s an unwritten rule that any pay-per-view ending with K-Fed taunting will not be a pay-per-view to remember.

Beyond the wrestling, there were a couple of semi-professionally made promo videos, excessive drum rolls to reveal poll results, and too much of Maria acting like a bit of a boob. It’s not like there was anything tremendously bad throughout the event, it’s just there was nothing that stood out beyond the aforementioned DX segment. And if a backstage segment is the highlight of the night, I’m sorry to say WWE but you’re doing it wrong.