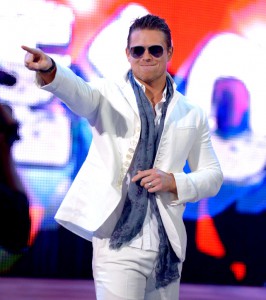 NZPWI, in association with SKY Television, had the opportunity to speak to WWE Superstar The Miz earlier today.

The Miz can currently be seen on WWE Raw (3.35pm Wednesdays on the BOX) where he and his stunt-double, Damien Mizdow, are in pursuit of the WWE tag team titles, currently held by The Usos.

Miz and Mizdow will challenge The Usos for the tag team titles at the upcoming Royal Rumble event. The Miz will also take part in the 30-man Royal Rumble match, with a spot in the WrestleMania main event on the line.

NZPWI’s David Dunn spoke to The Miz about his focus for Monday’s pay-per-view, his role in The Marine 4: Moving Target, competing in the main event of WrestleMania 27, the return of the Tough Enough series, and more in this exclusive interview.

David Dunn: We’ll kick things off with the WWE Royal Rumble. It’s live on pay-per-view on this Monday on SKY ARENA in New Zealand, and you’re pulling double duty at the event. You’re teaming up with your stunt-double, Damien Mizdow, to take on The Usos for the WWE tag team titles, and then you’re involved in the Royal Rumble match. Where’s your head at heading into this weekend with both of those matches on the horizon?

The Miz: First off, when don’t I pull double duty at Royal Rumble? I feel like every time I’m in the Royal Rumble I’m pulling double duty, whether it’s going for the United States Championship, Intercontinental Championship, and now the Tag Team Championships. It’s just another day in the life of The Miz and I am a seasoned vet at this sort of situation. I look forward to going into the Royal Rumble, being the first person to ever win the tag team championships and then go on to the Royal Rumble match and win that, throwing 30 people over the top rope and being the last man standing. They always say it’s every man for himself, but no one’s ever had a stunt-double that will do anything they say. People have had brothers, they’ve had friends, they’ve had family members, they’ve had tag team partners, they’ve never had a stunt-double, so I look at this as two ways of winning this match. I have two chances and everyone else has one, so it’s kind of nice.

The Royal Rumble’s in Philadelphia this year which is a noted wrestling town, lots of wrestling history there. What are some of your favourite cities to wrestle in?

Philadelphia’s great. I love wrestling in Cleveland because it’s where I used to live. I love Staples Center [in Los Angeles] because it’s my hometown. I love Chicago and New York because those are the big cities. You always want to go in big cities, it’s just a lot of fun, and it’s exciting and the arenas are all different. I love travelling all over the world to be completely honest with you. It’s so much fun to be a WWE Superstar and to be able to have the opportunity to perform in front of people that you never thought in your entire life you would be doing. It’s an incredible opportunity and it’s so much fun.

On top of these Royal Rumble matches you’ve also got The Marine 4 due out in the next couple of months. You’re the first man to reprise that role, and it’s a role you’re somewhat close to and it was quite important to you to be able to play a Marine accurately because, if I’m correct, you had a high school buddy who was a Marine?

Yeah, I had a high school buddy named Jeff Boskovitch who was a Marine and was shot and killed in combat over in Afghanistan so it really plays true to my heart. I really try to hold up as much as I possibly can to being a Marine and playing the correct way because I know the sacrifice these guys go through to protect our freedom out there. It’s very true to me. I really enjoyed doing this part. Let’s face it, those are the real heroes. I’m just playing a hero on The Marine 4: Moving Target, they’re the real ones so… it kind of doesn’t matter what the critics think, it matters to me what the armed forces think of this movie. I’m hoping they enjoy it and I think they will because it is action-packed through and through the entire time. I think people will enjoy it.

You’ve said that filming The Marine was the only way you could get some time off to maybe come back a little bit fresh for the audience because you don’t get injured, yourself, but you actually were knocked out or possibly concussed in your WrestleMania main event with John Cena at WrestleMania 27. Does that match still hold up for you as one of your favourites even though you can’t remember parts of it?

Of course, whenever you’re in the main event at WrestleMania it has to be your favourite. I don’t care if it was the worst match in the world or the best match in the world, it remains one of the most memorable because of where you’re at and how you got there and how many people have actually done it. There’s very few people that have actually went to WrestleMania and main evented and I have been fortunate enough to be one of those, and yes it sucks that I don’t remember it.

Changing gear a little bit here, the USA Network’s announced the Tough Enough series will be making its return some time this year. You were involved in season four – what are your thoughts on the return of the series and do you perhaps have any advice for potential applicants?

Absolutely, it’s a huge opportunity for anyone that wants to become a WWE Superstar to try out and try their best to get it because look where I went. I went to Tough Enough and it took me all the way, like you said, to the main event of WrestleMania and to be WWE Champion. The only sad part about anyone who goes on Tough Enough is they’ll always have to live in my shadow.

Once Tough Enough happened and you got signed by WWE you headed down to developmental in Deep South Wrestling. How envious are you of today’s developmental talents with the Performance Center down in Florida that they’ve got?

Actually I’m kind of glad that I got the training that I got. Obviously they have a beautiful Performance Center and they get to be seen on the WWE Network in a show [WWE NXT] that basically gets them ready for the WWE. I just enjoyed my experience because it was my own. I think everyone enjoys their own experience. Would I have liked the tools that they are given? Absolutely, but I think that me going to Deep South Wrestling as well as OVW, Ohio Valley Wrestling, as well as Ultimate Pro Wrestling gave me an opportunity to feel different areas and learn that every area is different and you have to work differently to get crowds to really believe in you and see your characters.

Early into your WWE tenure—I believe you’ve discussed it on Chris Jericho’s podcast among other places—you were kicked out of the locker room for some time for a minor mistake. As one of the more senior members of the roster currently, do you perhaps try to make the transition any easier for some of the guys or girls who’re coming up to the main roster for the first time from NXT?

You’re known to be a huge fan of The Ultimate Warrior when you were a child – Randy Savage as well. What was it like for you to see the Warrior inducted into the Hall of Fame last year and then how are you feeling now you know Randy Savage is going to be the first inductee into this year’s class of the Hall of Fame?

In the book WWE Rumble Road you discuss being on the road with Hornswoggle and Kofi Kingston as your travel partners, and playing a fair bit of Madden on your PSPs. Who are you travelling with these days and what games are you playing?

I travel a lot of times by myself.

Just because—yeah—I like to do things my way and when I want to do ’em, and I don’t want anyone else to tell me where I have to go and when I have to be there. So I like to be the leader of my own trip, I guess you could say.

Alright Miz, final question here and I’ll let you go. As a former WWE Champion, and a movie star—you’ve almost done it all—what are you hoping to achieve this year? What are your new year’s resolutions as we head into 2015?

Winning the Royal Rumble and going back to main eventing the WrestleMania and being where I deserve—where I should be—which is main eventing.