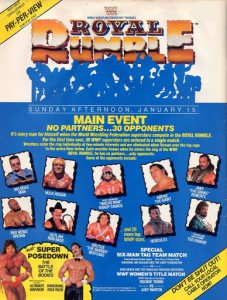 It’s about that time again, your weekly dose of wrestling’s past: Throwback Thursday! January 15 is a day filled with many interesting lesser known moments; from the man we would come to know as JBL winning the NWA North American Heavyweight Championship from none other than Kevin Von Erich, to the births of Eddie Graham and Kelly Kelly, to The Brooklyn Brawler winning the Border City Wrestling Can-Am Heavyweight Championship from Johnny Swinger (albeit, promptly being stripped of the title that same night for using underhanded tactics).

However, of the potentially great visual moments from this day—maybe not Eddie’s birth so much—we shall remain topical. We are currently on the road to the Road to WrestleMania, so we shall turn our minds back exactly 26 years ago to the first time the Royal Rumble aired on pay-per-view in 1989.

The quick results are as follows: Jim Duggan and The Hart Foundation (with patriotism and a 2×4) defeated Dino Bravo and The Fabulous Rougeaus (with Frenchy Martin and “The Mouth of the South” Jimmy Hart); Rockin’ Robin (with Sam Houston’s music) defeated Judy Martin (with no relation to Frenchy) to retain the WWF Women’s Championship; Ultimate Warrior (with the power of the Warrioooooooooooooor) defeated Rick Rude (with Bobby Heenan and a fabulous moustache) in a Super Posedown by disqualification; King Haku (with Bobby Heenan) defeated Harley Race (with Bobby Heenan) to retain the services of Bobby Heenan; and Big John Studd won the 1989 Royal Rumble by last eliminating Ted DiBiase.

Truth be told, I have no idea how the Royal Rumble has survived for so long considering its origins. I am of a split mind when it comes to this event for a couple of reasons.

On the one hand, this was the age of managers. Although Bobby Heenan was, for obvious reason, the most prominently featured manager on this night, he was by no means the sole representative. We also saw appearances from Slick, Jimmy Hart, Master Fuji, Miss Elizabeth, and someone I’ve never heard of called Frenchy Martin. This is the thing I miss most from this era – letting the wrestlers wrestle and the managers manage. Obviously, sometimes a wrestler can do both, but we have seen so often in the current age great wrestlers held back by a lack of charisma. Managers in this event was a major plus.

However, the managers can’t save everything. As great as Bobby Heenan was, even he could not save what Dave Meltzer judged a dud of a match. King Haku and Harley Race faced off in what could have been an incredible match. However, it was equivalent to the Umaga vs. Ric Flair match from more recent years. On one side, a beast of a man who can take the wrestling world by storm. On the other side, a great technician many years past his prime. This match was not even good for its time, and is a major negative of the evening.

A confusing part of the evening was what was christened as the Super Posedown. Any time a Posedown, dance contest, or any such nonsense happens these days, the fans rightfully boo and demand wrestling in its place. On this night, the idea of a Posedown drove fans into hysterics. They loved the fact that rather than fighting, two of WWE’s rising stars would take part in what was essentially a phallus waving contest. I guess it can’t be called a plus or a negative, because despite its ridiculousness, it was exactly what the fans of the time wanted.

But onto the big picture: the Royal Rumble match itself. The build up for this match was brilliant. There were no surprise entrants because every entrant was announced and promoted ahead of time. While there were obvious favourites for the match, most of the roster members in the match were given equal billing. The match itself was exactly what you would expect from a Royal Rumble, and even though there was no Kofi Kingston, Marty Jannetty had a nice Rumble moment trying to avoid elimination with just the top of his feet.

Furthermore, because the match had zero title ramifications (a WrestleMania WWE Championship match would not be implemented until 1993), it meant that the top guys could also be in this match. It also meant that if a lesser man won, it could do big things without doing the biggest things meaning that such a scenario was more likely. While it was known who was in the Rumble match, it was anyone’s guess as to who would win it.

New Zealand’s impact on the WWE Hall of Fame

Ahead of the biggest WWE Hall of Fame Induction Ceremony yet, NZPWI Editor David Dunn takes a look at some...

When it comes to wrestling prognostication these days it feels like I’d be as well tossing a coin – I’m...