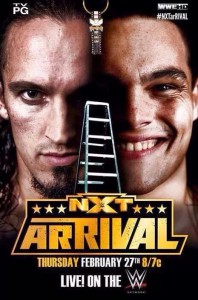 It’s about that time again, your weekly dose of wrestling’s past: Throwback Thursday. February 12 was not a big day in WWE history but includes a number of interesting morsels from the wider wrestling world; from One Man Gang’s birth in 1960, to Ted DiBiase defeating Dick Slater for the NWA Missouri Heavyweight Championship in 1978, to the beginning of Jerry Lawler’s 32nd reign as AWA Southern Heavyweight Champion in 1985, to Christian Cage winning his first NWA Heavyweight Championship at TNA’s Against All Odds pay-per-view in 2006.

However, of the potentially great visual moments from this day—maybe not One Man Gang’s birth so much—we will have to turn our mind somewhere more topical once again. As we have so few WWE events occurring on this day, we will look instead at an NXT event from February 27. With NXT TakeOver: Rival airing just a few hours ago, it seems only right that we turn our attention to the event that started all: NXT ArRIVAL.

The quick results are as follows: Cesaro defeated Sami Zayn in what was considered to be one of the best matches of the entire year; Mojo Rawley defeated CJ Parker in what is considered to be one of the most forgettable matches in all of NXT; The Ascension defeated Too Cool to retain the NXT Tag Team Championships; Paige defeated Emma to retain the NXT Women’s Championship; Tyler Breeze fought Xavier Woods to a no contest when Rusev interfered; and Adrian Neville defeated Bo Dallas in a ladder match to win the NXT Championship.

Anybody who watches NXT knows the quality of the product far exceeds that of Raw and SmackDown. It’s not that the wrestlers are better or worse; NXT has always had its fair share of duds. But every match in NXT feels like it means something, and it’s been that way from the very beginning. One year ago when NXT was making its first stand to an international audience, they left their mark by making the entire night feel special.

The first match between Cesaro and Sami Zayn was a match entirely about respect between two competitors. It’s very rare in the modern day where there is an abundance of gold to have two competitors fighting over something far more personal. Moreover, it’s incredibly rare to have two competitors lay it all on the line for no grand prize. This match was a rarity in context alone, but the show they put on in that ring at a developmental territory in front of no more than 400 audience members was a testament to the promotion, to the business, and to themselves. This was a night when people were taking notice and these two made them take notice.

It was unfortunate that the rest of the matches couldn’t quite stack up in terms of quality, but it does not mean that they weren’t very, very good. Paige and Emma were given the hard task of proving that they could do just as good as the guys on a card where they were the only girls. Considering the fanbase around these two wrestlers, it was no real surprise when they performed better than the two matches before them. If given time and opportunity, it is not hard to have these two women put on a spectacle.

And then there was the main event. Again, it couldn’t quite live up to the first match, but this was for the top prize in NXT and that’s what mattered. It wasn’t the top ladder match of all time, but it was two young guns in professional wrestling making their mark, and you couldn’t help but get lost in the pageantry. When Adrian Neville finally took down that title and was declared champion, you knew that he had made it to the beginning of a path that could lead him to glory.

But most importantly; as good as the wrestling was, as good as the storylines were, and as nice as it was to have Hall of Famers and champions endorsing the future of the WWE, it was the commentary that made this night matter. During every match, the entire commentary team was focused on that match. Every time a move was performed, William Regal was there to explain just exactly how that move hurt. Every time something spectacular happened, all three commentators reacted to it. These men cared about what was happening in the ring rather than spending an entire Divas match talking about hashtags.

Keith Lee will challenge Drew McIntyre for the WWE Championship next week on an already stacked Legends Night. Lee became...