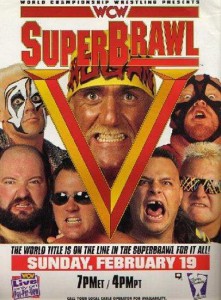 It’s about that time again, your weekly dose of wrestling’s past: Throwback Thursday! February 19 is not a day that could be confused as one of supreme importance to the world of professional wrestling, but it does include some noteworthy moments, from the passing of the first world champion of professional wrestling George Hackenschmidt in 1968, to the birth of NXT’s underappreciated Tye Dillinger in 1981, to the crowning of Xochitl Hamada as the first AAA Reina de Reinas, to the devastating losses of Tojo Yamamoto and Mike Awesome in 1992 and 2007 respectively.

However, rather than focus on the negative events within the pro wrestling world, we will focus on one of the events that happened on this day. The first option was 2006’s No Way Out held in Baltimore, Maryland. However, I wanted to kick it old school (I’m hip with the kids, yo) and instead opted for 1995’s rendition of SuperBrawl V, also in Baltimore.

The quick results are as follows: Alex Wright defeated Paul Roma (with Paul Orndorff) in an appalling match; Jim Duggan defeated Bunkhouse Buck (with Col Robert Parker and Meng) in an appalling match; Kevin Sullivan (with The Butcher) defeated Dave Sullivan in a match I can’t remember; Harlem Heat (with Sister Sherri) defeated The Nasty Boys in a, surprisingly, mostly good match to retain the WCW World Tag Team Championship; The Blacktop Bully (with Col Robert Parker) defeated Dustin Rhodes in an average match; Sting and Randy Savage defeated Avalanche and Big Bubba Rogers in a relatively fun match; and Hulk Hogan (with Jimmy Hart) defeated Vader by disqualification to retain the WCW World Heavyweight Championship in a match that also happened.

While I could go into detail about why each of the first three matches was terrible, instead I will simply say that the highly respected Dave Meltzer gave those three matches an average of negative-one stars. That’s right, the first half of a pay-per-view was considered to be almost completely negative. The only match that he didn’t give a negative rating to was the opening match, a match which Paul Roma made so terrible that he was legitimately fired afterwards. I think what makes that match not quite fall below zero was the simple fact that there was at least one wrestler, namely Alex Wright, who gave a toss.

The fourth, fifth and sixth matches managed to pull it together a bit, with standard performances from the likes of Booker T, Dustin Rhodes, Randy Savage, Sting, Avalanche, and Big Bubba Rogers. While standard isn’t what you want for a pay-per-view event, at least it was better than the garbage that was put on before. Moreover, The Nasty Boys were also surprisingly okay, although I do know they have their fans for some strange reason.

Then the main event happened. It had all the pomp and circumstance (sorry Macho Man) you could want for a main event, it had two giants of the wrestling world colliding, and it was a hugely massive disappointment for any of the fans in the arena. In fairness, I went into it expecting nothing interesting (I’ve never understood Hulkamania) and I wasn’t let down. But I was hoping Vader could provide some level of entertainment. My wish was not granted and Ric Flair turned what should have been a clean win into a tainted victory; a boring end to a boring night.

I guess, in defence of the event, WWE Network did warn me that this was “presented in the most complete form possible, due to original production technical difficulties”. I thought it was just explaining that the first part of the first match wasn’t recorded properly and is why it wasn’t played. I didn’t realise that the warning meant they lost all the enjoyable parts from the event.

This is a pay-per-view that features boring wrestling and boring storytelling. There was no major happening that occurred at this pay-per-view. This is one of the WCW events that never need to be watched again. I said it before and I’ll say it again: don’t watch it, don’t waste your time, don’t waste your life.