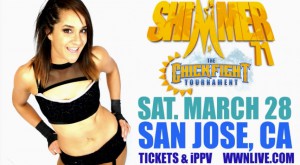 New Zealand’s Evie is the latest entrant to be announced for the ChickFight tournament held at SHIMMER 71 in San Jose, California, this WrestleMania weekend.

“Are you ready for a ChickFight?,” Evie asked in a video released early this morning. “Because this chick, this chick can fight, and I’m bringing the kicks.”

This is the third year Evie has been involved in SHIMMER’s annual WrestleMania weekend event. In 2013, the former IPW Women’s Champion made her United States debut in a five-way bout at SHIMMER 53. Last year in New Orleans, she wrestled what many considered to be the match of the night against Hikaru Shida at SHIMMER 62.

For the first time since 2007, SHIMMER 71 takes the form of a tournament, with the winner receiving a shot at the SHIMMER Championship currently held by Nicole Matthews.

The ChickFight Tournament—named after a series of events held in San Francisco—will be divided into three brackets. After wrestling quarter and semi-final matches, three women will advance to a triple threat final with the number one contendership on the line.

SHIMMER 71 will be available worldwide on iPPV, and airs at 8am on Sunday, March 30 in New Zealand. Register for a WWN Live account to purchase the live broadcast, including on-demand replay access. SHIMMER 71 costs $14.99 USD.