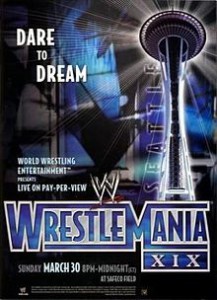 It’s about that time again, your weekly dose of wrestling’s past: Throwback Thursday! It seems to be a commonality at the moment, but March 5 was not what one could call a menagerie of memorable moments. There were championship wins for The Fabulous Kangaroos, Mr Kleen & Whipper Billy Watson, and Wahoo McDaniel in ‘59, ‘62, and ‘71 respectively (what happened to these kinds of names?); Paul Heyman debuted for the WWF as a colour commentator on an episode of Raw which also saw The Hardy Boyz win their fourth WWE Tag Team Championships; and in a devastating turn, the incredibly eerie William Moody, professionally known as Paul Bearer and Percy Pringle, passed away in 2013.

However, we are now full steam ahead on our road to WrestleMania (or is it Fastlane to WrestleMania now?). As such, it only seems fitting that for the next few weeks, we have a look at this year’s WrestleMania card before rewinding to the genesis of some of this year’s main acts. This week, we place our focus on “The Beast Incarnate”, the reigning, defending, undisputed WWE Heavyweight Champion of the World, Brock Lesnar as he makes his WrestleMania debut at the 19th instalment of the event.

Just to quickly recap my thoughts on the event, I will simply say that this is one definitely worth re-watching to whet your appetite for the upcoming extravaganza. Ignoring the unnecessary Miller Lite Catfight Girls segments, along with the appalling music that came from “WWE’s favourite band”, Limp Bizkit, this event had some solid wrestling with some solid faces and solid storylines (is anyone else getting equally uncomfortable with the word “solid”?).

For starters, regardless of the fact that this was his WrestleMania debut, he wrestled like a veteran. I’m sure that those more involved in the more inner circles of the wrestling industry will find a green area in the match, but to the casual viewer, he wrestled like a superstar becoming a legend.

Moreover, this was the beginning of something special for the combination of Brock and Kurt. While they had already been feuding in the build up to WrestleMania, it was following this that the duo would form a more friendly rivalry. And then, a bit more down the line, Lesnar would prove how much of a beast he truly was by turning on his friend and siding with Mr McMahon. He would go on to lead a heinous career, one of brutality that has remained to this day.

Finally, I would be remiss to not mention that this is the match featuring the shooting star press. Anyone who has not been living under a rock for the last 12 years (damn, I’m getting old), has seen this image before. For those of you who don’t know the story surrounding this, I’ll leave it for you to enjoy. It is truly a moment that must be seen to be believed.

So that’s it for this week’s; Brock Lesnar’s WrestleMania debut. Keep an eye out for next week’s edition to see which of this year’s WrestleMania competitors we’ll be digging into the past of.