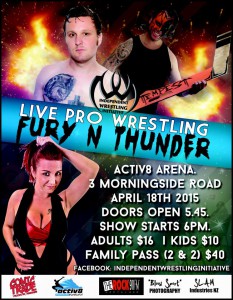 The Independent Wrestling Initiative (IWI)’s second event will be headlined by a title bout for the Jackson Shield.

Fury N Thunder, held tonight at the Activ8 Arena in Whangarei, will see Kingston Eclipse put his title on the line against Graham Hughes in a rematch from the Maniacs United Roads End event.

Eclipse bested Hughes last week in Auckland, but now both men have had a chance to scout each other first hand the Jackson Shield is anyone’s to win in Whangarei.

Meeting on neutral ground could prove to work in Hughes’ favour. Eclipse has made his most noted title defenses in Auckland, while Hughes has experienced success around New Zealand with Kiwi Pro Wrestling (KPW).

Eclipse, despite being the titleholder, also gives up a significant experience advantage to his challenger.

Will things go the same way as they did last week or can Hughes usurp the champ to win his first title in New Zealand?

IWI Fury N Thunder takes place tonight, April 18, at the Activ8 Arena in Whangarei. Click here for details. The card, subject to change, is listed below.

Kingston Eclipse has held Maniacs United's signature title, the Jackson Shield, for an astonishing 18 months. Having tuned back all...