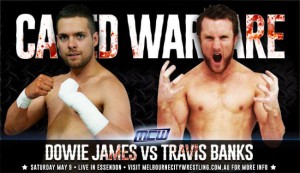 Travis Banks has avenged a loss to the Four Nations with a win over the New South Wales super-group this past weekend.

He will hope to score another win against Dowie James at MCW Caged Warfare in Melbourne this Saturday, May 9.

“I am Australian wrestling’s stepfather,” Banks warned James in a video. “You may hate me, you may loathe me, but kid, you will learn to respect me. Dowie, I need you to come sit on daddy’s knee, because I need to teach you a lesson in how to steal a show.”

Caged Warfare will mark Banks’ second appearance with MCW, having previously wrestled a triple threat bout against Chris Vice and current MCW Champion KrackerJak at MCW Clash of the Titans.

MCW Caged Warfare will be headlined by an eight-man steel cage bout, pitting The Estate—including New Zealand’s Slade Mercer—against a four-man side captained by Mr Juicy.