Eight vie for the Right 2 Challenge 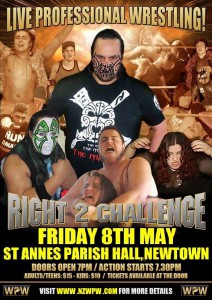 Eight men vie for a shot at the NZWPW Championship tonight at NZWPW Right 2 Challenge.

St Anne’s Parish Hall in Newtown will host four qualifying matches to determine who advances to the fatal four-way for the Right 2 Challenge.

Depending on the results of the qualifying matches, NZWPW fans could be in store for one of the biggest Right 2 Challenge matches they have ever seen.

Should Howard, Shaw, or Sinclair advance to the main event—and pick up the win in the fatal four-way bout—New Zealand could be poised to have another dual-champion holding two national titles simultaneously.

Alternatively, the Right 2 Challenge could be a career-defining match for the likes of Bryant or Mrs Silver should they be able to advance to the main event and score the victory.

For those unable to be part of the Right 2 Challenge, “Dream Catcher” Phil Woodgate has issued an open challenge for his NZWPW Championship earlier in the evening.

Woodgate became NZWPW Champion in a triple threat bout against Paul Sayers and “Rufguts” Roddy Gunn at the Road to Rescue event in September. Tonight will be the first time he has put the title on the line in his seven-month reign.

NZWPW Right 2 Challenge takes place tonight, May 8, at St Anne’s Parish Hall in Newtown, Wellington. Doors open at 7pm, with the first match scheduled for 7.30pm. The card, subject to change, is listed below.

Ben Mana defends his NZWPW Championship against three hungry challengers in the main event of PowerPlay XII tonight at Lower...