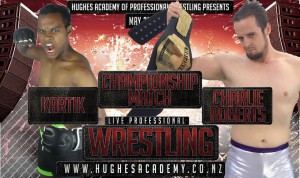 “The Neo Viper” Kartik is scheduled for the biggest match of his career when he challenges Charlie Roberts for the Hughes Academy Championship at Live Pro Wrestling tonight.

Kartik will be a massive underdog heading into the bout against Roberts, a position he knows well.

Kartik outlasted 26 other competitors in an Inter-Promotional Rumble at the last Hughes Academy Live Pro Wrestling event in order to earn his shot at the Hughes Academy Championship.

The 20-year-old is also used to battling the odds outside the ring.

Kartik suffers from a heart condition which causes problems when his heart-rate rises, he told Stuff.co.nz in an interview last week.

When he was 11, Kartik had a defibrillator inserted near his left pectoral to shock him when his heart-rate becomes too high.

“At first it felt like someone was hitting me,” he told Stuff. “The older I get, the higher the voltage, it feels like someone’s hitting me with a sledgehammer. When I was 14 or 15 I was really scared of it.”

Having learnt how to deal with adversity early in life, Kartik should be adequately prepared to face Roberts head-on this evening.

The Hughes Academy Champion has become an imposing figure since claiming the title last year. Roberts has wrestled up and down the country and defended his belt against all manner of challengers.

The Live Pro Wrestling main event will be Kartik’s first shot at a title.

“I feel so blessed [to wrestle for the Hughes Academy Championship],” Kartik told Stuff.co.nz. “I never thought I’d make it this far this quick.”

Hughes Academy Live Pro Wrestling takes place today, May 2, at the Kelston Community Centre in Auckland. Doors open at 6pm. Tickets are available on the door. The card, subject to change, is listed below.