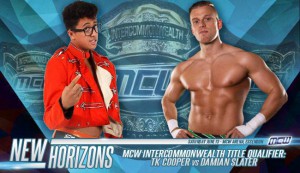 TK Cooper makes history tonight as part of a tournament in Melbourne to crown the first MCW Intercommonwealth Champion.

“The last few years the competition here in MCW has just been getting stronger and stronger,” MCW commentator Andy Coyne said. “It was [an] inevitability that a new championship would come in, and what better than the Intercommonwealth title?”

The title, unveiled during last month’s Ballroom Brawl event, can be held by anyone in the Commonwealth. Cooper faces Adelaide’s Damian Slater in a quarter-final match this evening.

Cooper impressed MCW officials with his debut for the promotion in March—a triple threat against Dowie James and Link Barnett—to earn his spot in the tournament. Slater, who wrestled for IPW in 2012, is the current Explosive Pro Wrestling (EPW) Champion in Perth.

Tonight’s winners advance to the semi-final stage of the Intercommonwealth Championship tournament, to be held at MCW Fight to Survive on July 15.

Also at New Horizons, New Zealand’s Slade Mercer and partner Gabriel Wolfe take on Hard Way Inc and The World’s Friendliest Tag Team in a no disqualification triple threat sure to have title implications for the winners.

All Slade Mercer wants for Christmas is the CPW Championship. The Mercenary challenges William Cutting for the title in the...