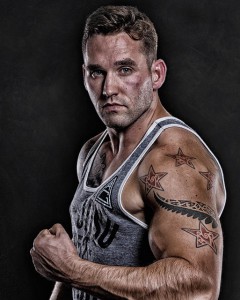 Auckland’s Hayden Daniels makes his debut in Queensland tonight in a number one contender’s match for the AWA Heavyweight Championship at Homecoming 2, one of the Australian Wrestling Alliance’s biggest events of the year.

It’d be a lot to take in for any competitor, especially one who started training in 2014, but Daniels says he is ready for everything that will come his way tonight.

“I’ve been training for a year and a half now and with my athletic background I feel like I’m prepared,” he told NZPWI. “I’ve been trained well and have taken the opportunity to pick the brains of people such as Bad Luck Fale. It’s all about getting more experience for me and experiencing different opponents.”

Daniels began his athletic career playing rugby in Auckland—and Italy—before a shoulder injury brought his days on the field to an end. Looking for something equally challenging to take on, Daniels signed up with the Hughes Academy of Professional Wrestling in 2014.

Since making his debut with the Hughes Academy, Daniels has wrestled in Christchurch, Auckland, Whangarei, and Sydney, where he appeared at the Supanova Pop Culture Expo with the Australasian Wrestling Federation (AWF) last week.

Tonight, the man known as the “Genetic Pitbull” takes on Mantis with a shot at the AWA Heavyweight Championship on the line.

And win, lose or draw at Homecoming 2, Daniels is scheduled to return to Australia in one week’s time for the Grindhouse 3.5 event on July 4.

Despite his busy schedule, Daniels has managed to find time to scout potential opponents Jonah Rock and Rufio, who meet for the AWA Heavyweight Championship in the Homecoming 2 main event this evening.

“Rufio, is quite the talent, and big man Jonah Rock is obviously someone I’d love to tangle with,” Daniels said. “[AWA] have some great characters too with the likes of the Australian Wolf. I’m looking forward to mixing it up with them.”

“I’m happy … having someone I’m familiar with in the locker room,” Daniels said. “Definitely looking forward to making some new contacts and growing that wrestling brotherhood though.”

TK Cooper makes history tonight as part of a tournament in Melbourne to crown the first MCW Intercommonwealth Champion. "The...