Maniacs United gets hardcore at Underground 3 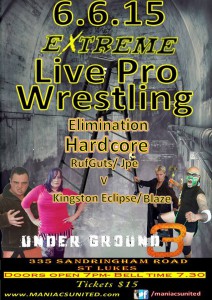 The roster of Maniacs United will live up to their name tomorrow when they present a night of hardcore wrestling action at Underground 3.

While Eclipse won’t be defending his Jackson Shield, a new challenger for the title will emerge when 12 wrestlers compete in a unique match-up.

Billed as a “number one contendership on a pole battle royal,” all 12 competitors will start the match in the ring with the goal of taking down the contract hanging in the corner promising them a match for the Jackson Shield. Wrestlers can be eliminated by being thrown over the top rope, as in a traditional battle royal, but it is not necessary to eliminate everyone in the ring – only to take down the number one contender’s contract.

JPE, part of the night’s main event and the number one contendership battle royal, will warm up for her matches with a “Slap Bet Challenge” against Dom Alupis. Both Alupis and JPE will sit on a chair and slap one another until someone falls from their seat.

A handful of other unique matches are set to take place at Underground 3, including a bout under British rules, a handcuff match, and an over-the-top challenge.

Maniacs United Underground 3 takes place tomorrow, June 6, at Mania Gym in Auckland. The card, subject to change, is listed below.