PWE Champion to be crowned in Morrinsville 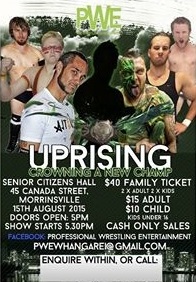 Wrestlers from around the country—and across the ditch—will descend on Morrinsville this weekend with the hope of leaving as the new PWE Champion.

A series of five qualifying matches (three singles bouts, a triple threat, and a tag team contest) will determine who advances to a six-man over-the-top-rope battle royal, the winner of which will become the first-ever PWE Champion.

“We want to bring back the glory days of New Zealand wrestling, and make New Zealand a hot spot for international wrestlers to come to.”

If everything goes well this weekend, PWE plans to continue holding events in Morrinsville and also expand into the Northland region where the promotion was founded, Ley said.

“What inspired me into wrestling was to be able to watch it on TV and go to live events,” he said. “I am hoping to inspire the next generation of wrestling fans.”

PWE Uprising takes place this Saturday, August 15, at the Senior Citizens’ Hall in Morrinsville. The card, subject to change, is listed below.