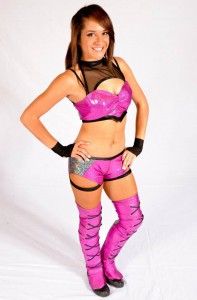 New Zealand’s Evie will receive a shot at an international title on her latest overseas tour.

The 27-year-old challenges Santana Garrett for the SHINE Championship in the main event of SHINE 30 this weekend.

The event, broadcast live on iPPV from Florida, is Evie’s fifth with the promotion and marks her first shot at the title.

Santana Garrett is the current SHINE and NWA World Women’s Champion. She defeated Mia Yim to win the SHINE Championship at SHINE 26 in April 2015, and has defended the title against Mia Yim and Allysin Kay at previous SHINE events.

Evie last wrestled for SHINE at SHINE 26, where she defeated Tessa Blanchard.

Besides Evie, several other international talents will wrestle on the SHINE 30 iPPV broadcast, including Australia’s Kellyanne, Madison Eagles, and Shazza McKenzie.