JPE and Scarlett meet in no disqualification title bout 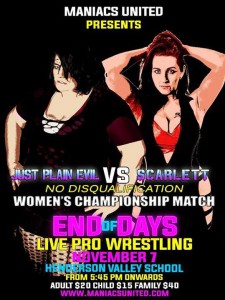 KPW Women’s Champion Scarlett defends her title in a no disqualification grudge match against JPE at Maniacs United End of Days this Saturday.

Scarlett requested the match after discovering JPE had struck her with the KPW Women’s Championship en route to scoring a tag team victory against Scarlett and Stix at Termination last month.

“I’m generally a nice person and don’t like to get too dirty in my matches but enough is enough,” Scarlett wrote. “I’ve asked for, and been granted, a No DQ singles match against JPE … No one to hide behind this time, Just Plain Evil. Oh, and that cup you seem to want to get your hands on so badly? It’s on the line.”

While her anger at being blindsided with her own championship is understandable, Scarlett’s haste to challenge JPE could prove to be ill advised.

JPE has amassed a 3-0 winning streak against Scarlett in tag team competition, and convincingly defeated Frankie Quinn to become number one contender to the KPW women’s title at the Maniacs Strike Back event in September.

As such, the challenger to Scarlett’s title heads into End of Days with momentum firmly behind her for a match in which she claims losing is not an option.

“My mind is 200 per cent focused on bringing that women’s title to Maniacs United and destroying Scarlett for good,” JPE wrote. “Table hunting today, chair shopping tomorrow, and if she’s stupid enough to put her title in my reach I’ll use that too.”

Maniacs United End of Days takes place Saturday, November 7, at Henderson Valley School in Auckland. Doors open at 5.45pm, with a scheduled bell time of 6pm. The card, subject to change, is listed below.