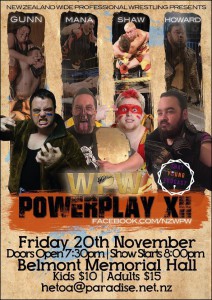 For James Shaw, one of the three, it’s an opportunity to compete in the title match he earned after winning NZWPW’s Over the Top Battle Royal.

For “Rufguts” Roddy Gunn, the runner-up in Over the Top, it’s a second chance at the PowerPlay XII he let slip through his fingers earlier this year.

For Chad Howard, the Right 2 Challenge holder, it’s a rare chance to become NZWPW Champion without invoking his coveted contract.

And for Ben Mana, heading into his fourth consecutive PowerPlay XIImain event, it’s an opportunity to prove definitely that he belongs at the top of the NZWPW roster.

“This one-man Maori Battalion is going to send you all home empty handed and stand proud at the end of the night still your NZWPW Heavyweight Champion,” Mana told his challengers.

Gunn, Howard, Mana and Shaw aren’t the only competitors with something to prove. Scarlett renews her rivalry with Misty in a match that will settle old scores.

“My goal for 2015 was to face as many new opponents as possible, after feeling a little stale cycling through the same three opponents in my rookie years,” Scarlett wrote. “Since my last match against Misty in May I’ve battled 14 new faces, both male and female. Tonight I get to test if all that variety pays off.”

NZWPW PowerPlay XII takes place tonight, November 20, at Belmont Memorial Hall in Lower Hutt. Doors open at 7.30pm with a bell-time of 8pm. Tickets are available on the door. The card, subject to change, is listed below.