by Steve McCleary
in Reviews
0

You just can't take this guy anywhere near a window. 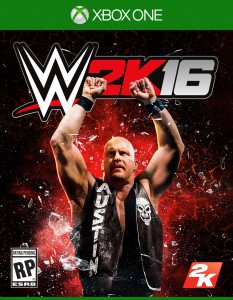 Our faithful annual wrestling title has arrived. With Stone Cold Steve Austin as the cover star and lead character in the game’s lone Showcase, you’ll hear the sound of breaking glass quite a lot as you traverse this year’s addition. Although whether that noise is the arrival of the Texas Rattlesnake or your game after it’s encountered yet another glitch, is a hard question to answer (just kidding – it’s both).

WWE 2K16 has been marred by an impressive list of glitches, snaring most of the spotlight over its new features. Some of the classics – Superstars with edited attires would be invisible during victory scenes, you couldn’t freely defend titles in Universe mode, and male superstars would do a Diva’s celebration if teamed with a female competitor. Few wanted to talk about gameplay improvements when so much seemed to get past the testers. But now that the first patch has dropped and addressed most of these issues (along with breaking Tyler Breeze’s entrance in the process…) the question can be posed – is this year’s installment worth your time?

I can’t remember a year which has had the game be as much of a mixed bag as this. Where it excels is with the base gameplay, the large roster, and a lot of the presentation aspects (including many of the talent now having voice taunts). Where it’s let down is with the match types – while more of the options that had been removed from WWE 2K15 are now back, like ladder and handicap matches, there’s still plenty that have not returned and almost none of them have had any updates to their functions. Over the years matches like the Elimination Chamber and Steel Cage have actually lost interactivity. On top of this, the greatest addition to the series, the Match Creator, has still not made a reappearance.

The Stone Cold Showcase is a strange beast. If you’ve played last year’s Showcases, you know what to expect. You’ll run through important moments in the character’s career, completing historical objectives and performing a lot of quick time events. At times it bridges on tedious, making your way through everything you have to do, and there are others where the nostalgia kicks in and you remember how much fun it was to watch this in real life. Notable (but understandable) sections are missing, thanks to them not being able to use people like Owen Hart or Kurt Angle, but it does a good job overall.

MyCareer mode is back, and much less of a grind than last year. There’s a greater emphasis on storylines and rivalries, and you get the chance to interfere at various points in other matches. And while Renee Young’s model looks somewhat frightening in certain backstage interviews, it’s a fun addition to have promo choices to lead your character down the personality path of your choice.

Universe Mode returns, but hasn’t had a lot of changes, other than wrestlers being able to perform on multiple shows. The biggest shift comes in the form of gameplay, which is where this year’s title really makes its mark.

The chain wrestling returns from WWE 2K15, but less clunky and more like the beginning of a real match. Strikes have been separated into categories like how grapples are, giving you access to a lot more moves from each position. Reversals are now limited, with technical wrestlers getting more at the start of a match, leading to another level of strategy to when you choose to use them – meaning the days of reversal-fests are thankfully history.

Pinning has been upgraded from last year’s near-impossible system to one that feels more natural. Submissions have also been altered, to a much more divisive result, as a majority of people are finding it impossible to use them.

The biggest change is the addition of personality traits. This comes into play across the entire game, especially enhancing what you do in Universe and MyCareer. Wrestlers now have a range of characteristics, including Disciplined, Egotistical and Bold, that affect how they compete. A Treacherous Superstar is likely to turn on their partner, whereas a Cowardly one might get themselves disqualified if the going gets tough. It’s here where each wrestler you fight against starts to feel less like a copy/paste and more like how they act on TV.

All of these new gameplay features work well in unison, creating an experience that feels like an actual match. It’s possible to have fun squash matches or epic battles worthy of WrestleMania, all by just playing however comes naturally to you.

I don’t think the actual matches have ever been this good in a wrestling title, No Mercy notwithstanding. If you liked last year’s changes to how the game played, you’ll have a blast with WWE 2K16. But you can’t help but always think, “Next year. Next year they’ll add back in all the stuff I love. And fix the broken parts.”

The problem is, we say that every year. It’s always a few steps forward and a few steps back. This year has the return of Create A Diva, Create A Championship and Create An Arena… all aspects of the game that shouldn’t have been removed in the first place. WWE 2K16 also features the largest roster ever… but leaves out the Four Horsewomen. While some of these choices have reasons beyond the control of the developers, it’s still the final product on which they’re judged.

And so another year passes, albeit one with improved core gameplay, where we wait for tired match types to finally get upgraded and the return of all the interactive options that used to make these games really fun.