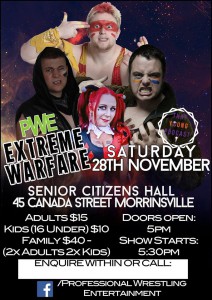 James Shaw sets his sights on the PWE Northland Championship this weekend as he heads to Morrinsville to take on Stix in what will be the champ’s first title defence.

Shaw has won most titles he’s had an opportunity to compete for—from the Armageddon Cup to the IPW Championship—and looks at add another to his stacked CV at Extreme Warfare (tonight, 5.30pm).

Stix’s path to singles gold has been much different. The Rumbling Rocker lost out in a six-man battle royal to crown the first PWE Northland Champion at Uprising in August but took advantage of a temporary 24/7 stipulation put in place by then-champ Tank to claim the title at the end of the night.

Extreme Warfare will be Stix’s first scheduled main event bout, and his first opportunity to defend the PWE Northland Championship.

“This man has never done a main event match before, will he crumble under the pressure? Shaw asked on his Facebook page.

“You know what I plan on doing on the 28th? Becoming the third-ever PWE Champion.”

PWE Extreme Warfare takes places today, November 28, at Morrinsville Senior Citizens Hall, 45 Canada Street, Morrinsville. Doors open at 5pm with a bell-time of 5.30pm. Tickets are available on the door at a rate of $15 for adults and $10 for children. The card, subject to change, is listed below.