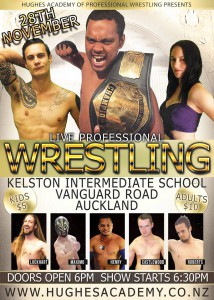 Kayne asserted herself as the number one contender to Misty’s title when she attacked the champ at the Live Pro Wrestling event in October.

Kayne told fans that night she would take the title in November, and reiterated her statement on her Facebook page:

Misty, the defending champion, could not be reached for comment.

Hughes Academy Live Pro Wresling takes place tonight, November 28, at Kelston Intermediate School, Vanguard Road, Auckland. Doors open at 6pm with a bell-time of 6.30pm. Tickets are available on the door at a rate of $10 for adults and $5 for children. The card, subject to change, is listed below.