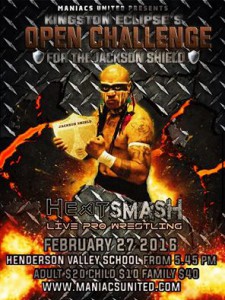 Having tuned back all manner of challengers, from Auckland and around the country, Eclipse will put the Jackson Shield on the line in an open challenge this Saturday, February 27, at Maniacs United Heat Smash.

No one had answered Eclipse’s challenge as of Thursday evening, making it likely the challenge will not be accepted until bell-time at Henderson Valley School.

This puts Eclipse at a significant disadvantage, with no time to prepare for a specific opponent, while whoever plans on answering the challenge can formulate a game-plan for Eclipse over the next couple of days.

Finding the answer to beat Eclipse is easier said than done though. Just ask Dan Stryker, or “Rufguts” Roddy Gunn, or Graham Hughes. All have fallen in the path of the Native One since he first won the Jackson Shield 18 months ago.

To make matters more interesting, Eclipse is rumoured to be heading abroad—heading to Japan to further his skillset.

Can Eclipse leave Maniacs United undefeated, still recognised as the holder of the Jackson Shield? Or will someone find a way to knock Eclipse from his spot atop the Maniacs United roster before he departs the country?

Both women are more than familiar with the other, having battled over the KPW women’s title several times throughout 2015. JPE finds herself as the current holder, but Quinn will be more than happy to dethrone JPE in her home promotion and take back the title to start 2016.

Whoever walks out of Heat Smash as the KPW Women’s Champion will have earned their victory, with the two-fall stipulation ensuring neither woman can claim a fluke victory for their opponent.

Maniacs United Heat Smash takes place this Saturday, February 27, at Henderson Valley School in Auckland. Doors open at 5.45pm. Tickets are available on the door ($20 for adults, $10 for children). The card, subject to change, is listed below.