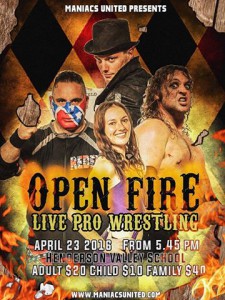 Eight teams compete for a shot at the KPW and NZWPW tag team titles tonight in the main event of Maniacs United Open Fire.

A mixture of established teams (like El Oro Maximo & Shadow Ninja, and Rebels Inc) and new alliances (like Curtis Castlewood & Graham Hughes, and opponents-turned-partners Devin Lockhart & Frankie Quinn) have stepped up to take part in the Tag Team Tumoil bout.

Tag Team Turmoil operates in similar fashion to a gauntlet, with two teams beginning the match and a new team entering when one has been eliminated. This continues until one team is left standing, and declared number one contenders to the KPW and NZWPW Tag Team Championships.

But despite a big win tonight, whoever is victorious in Tag Team Turmoil will ultimately become losers, according to one half of the tag team champs, Chad Howard.

“The winners [of Tag Team Turmoil] are the losers,” he said regarding their eventual title match,”because I don’t plan to lose anything!”