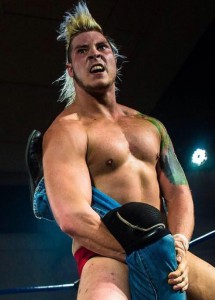 He’s travelled the world—from Singapore to Japan, the United States to the United Kingdom—and now Josh “The Axe” Shooter has New Zealand in his cross hairs.

The globetrotting Australian takes on Brook Duncan tonight at IPW No Guts, No Glory.

“Funnily enough, I was meant to go over [to New Zealand] ages ago,” Shooter said. “I kept talking to Travis Banks about it and even Bea Priestley and TK Cooper … by the time I got around to organising it they’re not in the country anymore.”

It could be said Banks, Cooper and Priestley are following a path first forged by wrestlers like Shooter. After making his mark in Australian promotions like Melbourne City Wrestling (MCW) and Outback Championship Wrestling (OCW), The Axe spent two months last year immersing himself in the UK’s pro-wrestling scene.

Shooter spent time at the world-famous Projo, Progress Wrestling’s training school, training with Darryl Allen, James Davis, and Jimmy Havoc, who he credits with opening his eyes to the British style.

By the end of his time in the UK, Shooter had the opportunity to wrestle current WWE NXT star Tomasso Ciampa on an IPW:UK event. Such a high-profile opponent could have been daunting but the chance to hang with one of the best in the world proved to be a massive confidence booster for Shooter.

“It was surreal but at the same time it was challenging and a confidence booster at the end of it,” he said. “Seeing I can actually hold my own against some of these people made me realise that this could actually be a reality. Everyone believes the hype of, ‘Hey these people are so good, I can’t hold my own, I still need to keep training’ and everything else. For me, it just felt possible.”

Now back in Australasia, Shooter’s the one doing the schooling. The Axe will hold a seminar in Auckland this Sunday to pass on the knowledge he’s gained around the globe.

But before he can take aspiring wrestlers to school, he has to take on Brook Duncan. It’s Axe Man vs. Sax Man tonight at IPW No Guts, No Glory in Josh Shooter’s New Zealand debut.