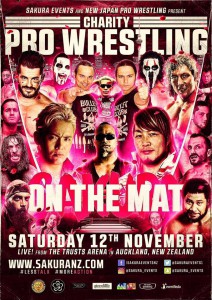 Tickets to Sakura Events On the Mat Charity Pro Wrestling, featuring the stars of New Japan Pro-Wrestling (NJPW), are now on sale.

The event takes place Saturday, November 12, at The Trusts Arena in Auckland.

Twenty-four wrestlers are currently confirmed for the promotion’s star-studded roster, with more still to come according to Sakura officials.

Bad Luck Fale’s Bullet Club will be in action, featuring the likes of The Guerillas of Destiny, Kenny Omega, The Young Bucks, and Yujiro Takahashi.

ROH regulars Bobby Fish and Kyle O’Reilly—better known as reDRagon—will be part of the Sakura Events card, as well as Jay and Mark Briscoe, and the flamboyant Dalton Castle.

“Sakura Events wanted to ensure our ticket pricing was fair and that our event was accessible to everyone,” Sakura Events President Peter Josephs told NZPWI.

“We know it’s hard out there [and now] families can go only paying $20, and $10 for kids, to watch some of the best wrestlers in the world and get a decent view.”

Part of the proceeds raised by On the Mat will be donated to The Key to Life Charitable Trust, the suicide-prevention organisation founded by Mike King.

Tickets were scheduled to go on sale earlier this month but changes to the event’s seating plan, embedded below, caused a delay in the on-sale date, Mr Josephs said.

“A wrestling event is a lot different to boxing, so just getting the maximum amount of seating in there with food and drink outlets seemed to hold us up,” he told NZPWI.

“It’s all sorted now and we are excited. Tickets have already sold faster than we thought, so by the looks of it, people need to be quick.”