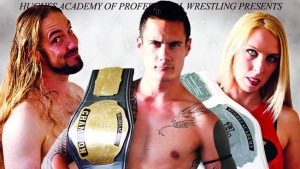 Kenith and Tabitha continue their reign atop the Hughes Academy after Saturday’s Live Pro Wrestling event.

Both members of the gold-wearing power couple retained their titles at Kelston Intermediate School.

Tabitha held onto her Hughes Academy Women’s Championship with a win against Krystal Kayne.

“So, things didn’t quite turn out as planned,” Kayne wrote after the match. “But, just you wait Tabitha. I hope you have eyes in the back of your head because you never know when I’ll be standing right there behind you to take back what’s rightfully mine.”

Charlie Roberts may have bitten off more than he could chew at Live Pro Wrestling.

The Alphalete interjected himself in Kartik’s match with El Oro Maximo at the top of the night, and caused Kartik a disqualification loss when he attacked the Mexican luchador. Roberts tasted defeat himself later in the night courtesy of a superkick from Paul Sayers.