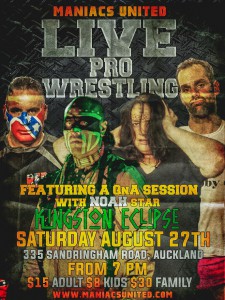 After months in Japan with Pro Wrestling Noah, Kingston Eclipse is back in New Zealand.

The Native One will take part in a Q and A session about his time abroad at Maniacs United Live Pro Wrestling tonight, August 27.

Despite his time away from the country in the dojos of Japan, Eclipse still remembers what happened when he last stepped foot in a Maniacs United ring.

Blaze, the current holder of the Jackson Shield, defeated Eclipse for the title as part of a multi-man ladder match. It would turn out to be Eclipse’s last match in New Zealand before departing for Japan – something Blaze sees as more than a coincidence.

“I know you’re there for a Q and A,” Blaze told Eclipse. “I’ve got a question for you, Kingston. Are you man enough – do you have the guts to step in the ring with a guy you ran from? Are you brave enough? I don’t think you are…”

Neither Blaze nor Eclipse are scheduled to wrestle on tonight’s card. But with this much hostility between the two, anything is possible.

Live Pro Wrestling will feature an open challenge from JPE, who is willing to take on anyone provided they haven’t wrestled her before. Graham Hughes faces the debuting CJ Savage. And Frankie Quinn meets El Oro Maximo in intergender action.