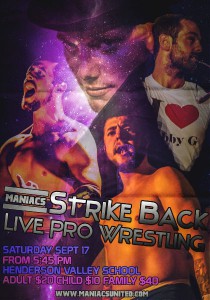 Maniacs United launches into a busy schedule tonight, holding the first of three events in the next four weeks for the Auckland-based promotion.

A triple threat for the Jackson Shield headlines tonight’s Maniacs Strike Back event at Henderson Valley School – a familiar location for Maniacs United fans. Blaze defends his title against Charlie Roberts and Paul Sayers from 5.45pm on a card that also includes:

A week from today, the Maniacs United crew hit the road to Te Kopuru (70km outside of Whangarei) for a fundraiser to benefit the Te Kopuru Fire Brigade. Card details have yet to be announced.

As the dust settles from its September events, Maniacs United returns to Henderson Valley School for Termination on Saturday, October 15. A staple of the promotion’s calendar, Termination is scheduled to see Blaze, Just Plain Evil, and Bobby G in action in what will be the second-to-last Maniacs United event of 2016.