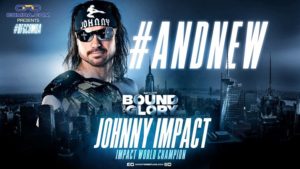 Johnny Impact – aka John Morrison – has capped off a roller-coaster 2018 with a world title win.

But no sooner had Aries been pinned than he was back on his feet. Aries appeared to yell at Impact Wrestling commentator and executive vice president Don Callis – which was not acknowledged on air – before promptly leaving the ring.

Impact celebrated with the title belt and his wife, Taya Valkyrie, as the pay-per-view broadcast came to an end.

Aries and Impact had been hostile leading up to Bound For Glory. A series of since-deleted tweets involving Taya Valkyrie stirred up emotions on both sides. The two had to be physically separated after the Impact Wrestling Hall of Fame induction ceremony on Sunday (New Zealand time).

Aries voiced his issue with Impact moments before the main event: “I’ve been here putting the work in, you’ve been off filming your reality shows, nursing your injuries, going off and getting married … I think you’re a liar, I don’t think this means anything more to you than any of your other quests.”

A back-and-forth match stepped up in intensity when Aries ducked a superkick from Impact and hurtled out of the ring with a dive aimed at Taya Valkyrie. Impact followed Aries to the outside and slammed A-Double’s head against the guard-rail.

Back in the ring, a second superkick connected and Impact followed up with a brainbuster – Aries’ signature move. With the champ vulnerable, Impact crashed down upon him with Starship Pain to become the new Impact Wrestling World Champion.