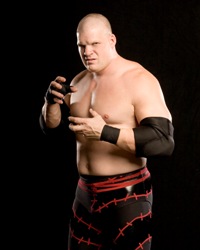 It was NZPWI’s privilege on Thursday morning to speak to the ECW Champion, Kane.

Well-known as one half of the Brothers of Destruction, Kane and the Undertaker’s sometimes difficult sibling relationship has also helped them to achieve major goals.

Unmasked in 2003 by Triple H, Kane has gone on to forge a career as “The Big Red Machine”, undoubtedly one of the most aggressive, brutal and feared competitors in the industry.

Kane took time out in the lead-up to the WWE SmackDown/ECW New Zealand tour to speak to NZPWI Editor, Kirsty Quested.

Kirsty Quested: In an industry where big men are commonplace, he still stands out. At almost seven feet tall, my guest at this time is undoubtedly one of the genuine monsters of the profession.

One half of the feared “Brothers Of Destruction”, he is known for his hard-hitting style and undeniably brutal in-ring abilities, winning the ECW Championship at WrestleMania in only nine seconds. 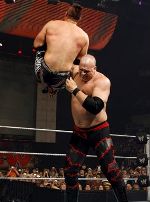 He is the Big Red Machine, Kane.

Hi Kane, how are you?

This is going to be your second trip out to New Zealand in June. Is there any chance you might get to have a look around?

I don’t know, normally our tours are pretty packed. I certainly hope so, after seeing the Lord of the Rings and all the beautiful scenery, it would be pretty cool, but shit, I don’t know. We stay pretty busy.

ECW’s been a somewhat controversial point with fans since the brand has, in many ways, moved away from what the “old” ECW and its personalities were famous for; so, what does being ECW Champion mean for you, for the fans, and for the brand itself? 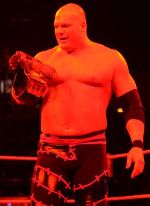 In all seriousness, I think having someone like me, with the notoriety and the history that I have, I think I bring a lot of credibility to the ECW Championship. And my goal is to help to elevate the brand as much as I can. And just to bring it up. Not to say that it’s down, but certainly to help ECW realise its potential. And I understand, certainly, what you’re saying… but that’s what I see, that’s what I’m trying to do.

Speaking of championships, take us back to your famous 24-hour run with the WWE Championship.

Yes, I beat “Stone Cold” Steve Austin! The title was WWF, and I beat “Stone Cold” Steve Austin in a First Blood match, in Pittsburgh. It was King of the Ring, it was the same night that Mick Foley was thrown off the top of the cage, and then choke-slammed through the cage, and actually, what was really neat about the whole experience – I mean, being WWE Champion is awesome – but even the next night, we were in Cleveland, Ohio, for the Raw television show, and we had a rematch that night, and the atmosphere was just electric. It was just truly awesome. And I just, I’ll NEVER forget either one of those nights.

Yeah. I think that’s pretty much the loudest the crowd’s ever been on Raw, when you dropped it back to Steve Austin.

You’ve been involved in some angles over the years where storylines have been pretty outlandish – and in some cases pretty controversial – what’s your take on this aspect of the business, and which one of those angles has been the most memorable for you? 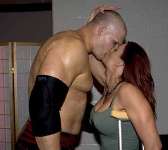 I think the Lita angle, the Lita storyline was probably the most memorable. Because it was pretty compelling television.

[laughs] And also, one of the questions you get asked a lot, is whether you like being a good guy or a bad guy. And the thing about being a bad guy is, you can do anything you want. All the barriers and the boundaries are down. And in that respect, it was fun, and of course it was the ultimate bad guy thing.

This is what I keep hearing. It’s good to be bad.

Losing the mask. How has that shaped your career since Triple H unmasked you?

Well I think it added a whole new dimension. A lot of what we do is based on emotion, of course, and most people read emotion in facial expressions, and with the mask, the best I could do was body language to portray emotions. And now, I can use my face as well. And again, that adds a whole new dimension to the character, and removes some obstacles, some barriers that I might have had.

You’ve mentioned before, that of those guys on the current roster, you’d really like to face John Cena. Is that still the case, and if so, why?

Well, yeah, that’s another question I get asked a lot, is who’s your dream match. I think I’ve been in the ring with John Cena twice, maybe three times. I think I’ve done a tag, and then a couple of battle royals or something like that. And that’s one of the few guys – everybody else that I can think of offhand, I’ve had numerous matches with – so that would be the one guy that I’ve never really wrestled against. So as far as just having – you know, you could say, who would it be – it would be John Cena for that very reason.

The Wellness Policy has certainly come to the fore in the last couple of years; how’s it affecting the locker room in general?

I think most of the guys – of course there’s people who complain any time there’s change – but I think for the most part the guys realise that the Wellness Policy is a good thing. Especially someone like me, who’s been in the business for a long time, and has seen some of the things that have unfortunately happened to people, time and again… and it’s one of those things where, over the past few years WWE has tried to up the level of professionalism. And there’s just no place in our business anymore for the “rock star” attitude, and that sort of stuff. It’s just not acceptable. And for that reason I think the Wellness Policy is needed. And also on a more personal level, like I said, going back to some of the tragedies that I’ve seen, if it can help people overcome personal problems, then I’m all for it.

With your interest in politics, what did you think of Senators Clinton, Obama and McCain appearing on Raw the other week?

Is it basically anyone that gets people to vote is a good thing?

I think, once again going back to the wrestlers, and the level of WWE, just the fact now that you have presidential candidates wanting to come onto our show, is quite a testament to the power of our brand of entertainment. And – actually – [laughs] I think it was probably better – it was one of those deals where they probably benefited more by coming onto our show, than we made by having them! [laughs] Because they were able to reach a different audience than they normally would.

It was uh… it was… it was interesting.

It sure was. For the wrestling fans who are used to great promos, it was “interesting.” Mmm. 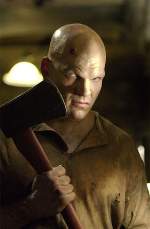 How’d you find making a movie? Is that something you’d like to try again?

Yeah it was cool, it was neat. It was really nice being able to sleep in the same bed for a couple of months, that hasn’t happened to me in years now.

But, it was different. I mean, as far as… it was neat to do something different, and it was also for me it was extremely cool to see how the whole movie business works, and the magic, and how it comes together, and all that sort of thing.

But by the same token, I think all of us in WWE, all the superstars, you get addicted, and you get sorta used to walking out and having that interaction with the fans, and that was one thing that I missed. On the one hand I came away with new respect, for actors, because they’re in such an artificial environment that they truly are acting; on the other hand, you know… I missed the WWE fans being there with me.

WWE are holding tryouts for New Zealand wrestlers, when you come out here –

Oh really? I didn’t know that.

Yeah – well – they were going to do them last time, then this little carrot got yanked away from our guys, so hoping that it goes ahead this year, what advice would you give to our guys who are hoping for a shot?

Any tips on what – any specifics that the agents might be looking for?

Not really, I think the thing they always look for is a unique “look” … but no-one ever knows what that is until you see it, so [laughs] that’s sort of a dilemma. If you try to look unique… you’re probably not going to… so that’s one of those deals, I don’t know, if people have a whole lot of control over that… and also, have the wrestling basics down. Which I think, some people get a little ahead of themselves. They try to do the fancy stuff and they forget about the fundamentals.

Well Kane, thanks very much for your time, we really appreciate your talking to us, and we’re really looking forward to seeing you out here next month.

Well have a great time at the show, and I appreciate you guys having me on for an interview.