Cena retains against R-Truth at Vector 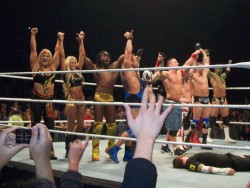 In front of a packed crowd, John Cena defeated R-Truth to retain the WWE Championship after hitting the Attitude Adjustment for the victory.

After the match, CM Punk stormed the ring, attacking the champion from behind. Punk’s allies then made their way to the ring and proceeded to beat down Cena before the rest of the locker-room arrived, cleaning house, leaving Punk surrounded in no man’s land. Cena’s allies hit their signature moves on Punk, followed by a final Attitude Adjustment to send the fans home happy.

Other highlights included CM Punk opening the event on the microphone. Punk sat down in the centre of the ring, ranting about other superstars in the back before being silenced after officials cut his microphone off after he mentioned Vince McMahon.

The Miz and Alex Riley competed in an Auckland Street Fight that saw tables, chairs and Singapore Canes come to the dance. The two brawled around the arena floor at the start of the match before returning to the ring. Riley speared Miz into a table positioned in the corner to pick up the victory.