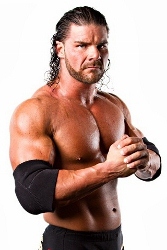 Roode set the wheels in motion for the match when he attacked Storm with a beer bottle on Impact Wrestling six months ago, but things have been brewing between him and Storm for a lot longer than that, he says.

“This match has been building for a lot more than just six months, when I turned on him and cracked that bottle over his head, it’s been building for the better part of 10 years. It’s an opportunity for two home-grown TNA talents to walk into a main event, take that spotlight and prove to the world why we belong in the main event picture. I’ve been main-eventing pay-per-views and live events and Impact tapings now [as champion] for the better part of six months, so I’m kind of getting used to that role. And I’m not ready to give it up yet, so I hope James is ready.”

While, on paper, Roode and Storm meet in a steel cage match for the world title, there is a lot more on the line at Lockdown.

“This isn’t just going to be a wrestling match,” Roode says. “This isn’t a bout for the world championship and business; this is a personal level, to prove who is the better man. Four years of tag teaming, four years of being together and getting to know each other so well, being TNA Originals – this is an opportunity for one of us to walk out of there proving ourselves, why we deserve to be in that main event and be that world heavyweight champion. I think I’ve always been better than James, and I’m going to prove it [at Lockdown].”

With all the buzz surrounding today’s championship match, a comparison can be drawn between Lockdown and Roode’s first pay-per-view main event against Kurt Angle at Bound For Glory last year. The pressure is different for a defending champion than for a first-time challenger though, Roode says. 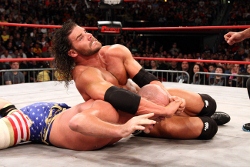 “The pressure I had going in with Kurt, I felt like I was a child, I was a kid on Christmas morning waiting for that opportunity to raise that world title for the first time. There was pressure from everywhere to perform – including from my tag partner at the time – to go out there and win because there was such a huge build-up. This time, I’m a little bit more mature, I’m relaxed a bit more. I’ve been the world champion for the better part of six months. I’ve been in there with the best, I’ve beat the best, so I’m confident. As well as I’m very, very anxious to get in there, to basically just go out there and shut James’ mouth, to prove to the world that I’ve always been better than him.”

Roode was defeated by Kurt Angle at Bound For Glory, but doesn’t concern himself with “what ifs” when it comes to the match.

“I don’t know if I had’ve won that night if I would’ve been as good as I am now,” he says. “I learned a lot from that match. That match really changed me as a human being, and changed me as a professional in many, many different ways. Losing that match may have been the best thing that’s ever happened to me … it taught me a lot about life and about the business.”

One of the lessons Roode has learned is how to handle the pressure that comes with being the TNA World Heavyweight Champion, something he thrives on, he says. 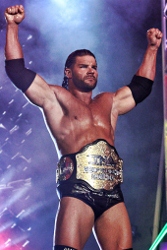 “Obviously when you’re the world champion you’re the face of the company. And when you’re the face of the company there’s a lot of responsibility that comes with it. You’re asked to go above and beyond the call of duty sometimes, for example doing press conferences like this, media appearances, going out each and every night and performing and outdoing everyone else, because you’re the world champion and that’s your spot, you should be better than everyone else. Those pressures come along with it, but I thrive on pressure and this is something I’ve wanted my entire life.”

While Roode 10 years ago wouldn’t have been able to predict the Lockdown main event, he could have told you he would be part of it, he says.

“10 years ago if you would’ve asked me if I was main-eventing Lockdown with James I probably would have said no. If you would have asked me if I was in the main event I would have said yes. This is something I feel like I was destined for. I busted my ass and literally sacrificed more than anybody could know to get to this point in my career. I’ve always wanted to be a world champion. I’ve always wanted to be in the main event.”

Having aspired to be world champion for so long, Roode is in no hurry to let anyone else take his spot just yet.

“As far as staying here, that’s my job,” he says. “Being the top guy and staying the top guy, that’s up to me now, same as getting here. I had an opportunity and I got here. Same with James, he busted his ass too. We may not like each other, but we respect each other, and he’s got a lot of talent. I’m sure he’d say the same thing about me. It’s all in what you do with what you’re given.” 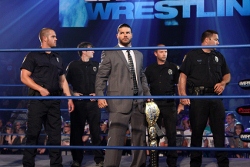 The champion is flattered to be compared to the late Curt Hennig – a man who he has studied for hours on video tape – but says he isn’t looking to model himself on anyone or anything else at Lockdown.

“WrestleMania, that’s obviously the biggest wrestling card of the year and it has been – that’s hard to compete with,” Roode says. “But now that that’s done and out of the way, people are talking Lockdown, people are talking James Storm and Bobby Roode. Everybody’s talking about it and I’m excited about it. There’s a lot of pressure that’s come along with this match, it’s such a huge build and it means so much to the company and on a personal level as well. I’m not trying to compare myself to another wrestling company or to another match in any other wrestling company to be honest. I’m just preparing myself to walk into Lockdown inside a steel cage and have the match of the year.”

If Roode is victorious on pay-per-view today, there is still a lot left for him to do as the TNA World Heavyweight Champion, he says. 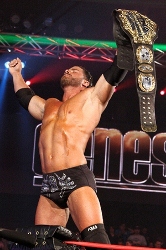 “The past six months I proved to a lot of doubters that I’m deserving to be a world champion. I am the most dominant world champion that this company’s ever had, and after I beat James [at Lockdown] I will continue down that path. I will continue to dominate and maybe hit legendary status, who knows? I don’t see my title reign stopping any time soon. My confidence level has never been so high. I’m in the best shape of my life. I’ve defeated the best. Month after month it seems like there’s a new guy trying to take me down and I keep one-upping them, keep outdoing them. Month after month, week after week, day after day I keep retaining that title. I’m looking forward to getting in there [at Lockdown] and proving all these critics wrong again.”

In the event that James Storm should defeat the champion though, Roode can’t help but be grateful to have held the title for the better part of six months.

“It means a lot,” he says. “I don’t think you could ask anybody who’d say they wanted to be a world champion for one week or one month, so obviously the longer the better.”

Bobby Roode looks to extend his title reign in a steel cage match for the TNA World Heavyweight Championship against James Storm at TNA Lockdown. Lockdown is available live on pay-per-view today, April 16, on SKY ARENA (channel 38) from 12pm, with a replay at 8.30pm.