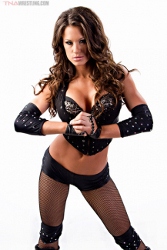 For many of today’s wrestlers, watching the larger-than-life characters of the 80s and 90s as a child was what inspired them to dedicate their lives to pro wrestling.

Yet it wasn’t until Miss Tessmacher held the Knockouts Tag Team Championships with Tara that she knew what she wanted to do.

“That’s when it became very real to me,” Tessmacher told a media line-up on Thursday. “I don’t want to say [Tara] completely carried us but she carried us a lot and I wasn’t experienced enough to do that. I brought things to the table but not as much as I could have.

“In that moment I realised, ‘I’ve got to get better. I want to be able to stand on my own and hold the Knockouts Championship.’ That feeling of success when we won the Knockouts Tag Team Championships – that’s what made me work and get hungry for the actual championship and go home and train and get a lot better to do that.”

Tessmacher has had a harder road to the top than most. As an eight-year-old, she and her twin sister were homeless, living out of a car in Texas while he mother saved enough money for an apartment, she told the Miami Herald earlier this year.

“I wanted to be like my brother – he played football – so I got into rugby at a young age. Volleyball, basketball, track, so I’ve always been an athlete.” 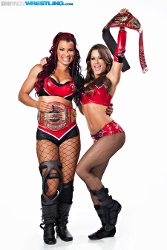 When Tessmacher got older she put her good looks to use as a model, auditioning for the WWE Diva Search and ultimately making it to WWE television as part of ECW’s Extreme Exposé alongside Kelly Kelly and Layla.

“[WWE] is a great company and it’s awesome to say I worked for them,” Tessmacher said, “but there really is no comparison between my careers with both companies. I came out and did a sexy dance routine every week. I was training back home but wasn’t getting to use what I was learning in practice and training. It was fun, it was great, and I made some good friends, but I’m an athlete and I wasn’t fulfilled going there to do a dance routine every week.

“Even though I wasn’t trained enough to go have a full match, that was understandable, but I would rather almost have been back training the whole time and been getting closer to what I wanted to do rather than going to dance.”

WWE released Tessmacher from her contract in November 2007 after she had spent almost one year as a dancer on ECW.

Refusing to let her WWE release be the end of her career, Tessmacher tried to model herself on women like Trish Stratus (“Trish came into the business as a model and was not taken seriously. Then we watched her grow into one of the best female wrestlers today. I’ve gotten compared to her a lot.”) and ultimately became part of the TNA roster in 2010 as Eric Bischoff’s assistant.

“It wasn’t really fulfilling,” Tessmacher said of her role as a secretary. “It wasn’t utilising me, my talents and what I wanted to do. I knew that to make an impact I had to go and quit everything else that I was doing.” 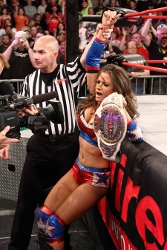 Tessmacher gave up on a Hooters pageant as well as a few other modelling gigs to commit 100 per cent to wrestling, and realised her ultimate goal at Slammiversary earlier this year when she defeated Gail Kim to become the TNA Knockouts Champion. And all in her home state of Texas.

“I was so happy, and finally I could just say to myself that I did it. I just proved the whole wrestling world wrong – Miss Tessmacher did – because I know no one thought I could do it because I’m just a model, I’m inexperienced, and especially getting in the ring with someone as talented and such a tremendous athlete as Gail. It was a great feeling.

“You talk about pressure, of course there’s a lot of pressure before because I’m trying to prove everyone wrong, that I’m not just a model, that I am an athlete, that I can do it, that I’m just as good, that I can hang in the ring.

“Now, I do believe the pressure is a lot worse now. It’s hard to – once you go up the only thing you can do is stay up and then you go down, so going out there every week to defend the championship, that’s pretty difficult. You’re just hoping ‘OK don’t let this be the match, Brooke, don’t mess up’.”

Hardcore Justice will be the site of the biggest moment in Tessmacher’s career yet, her first title defence on pay-per-view.

Tessmacher’s challenger Madison Rayne, has – coincidentally or not – been infatuated with senior official Earl Hebner in the weeks leading up to her title opportunity. 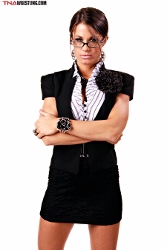 Defending the Knockouts title isn’t all Tessmacher aspires to. Her bucket list includes visiting Australia, South America and South Africa as well as putting out a workout video and honing her acting skills.

“Acting for me is not natural. I’d like to do that and do a few more music videos as well. That’s a little bit mainstream what I’m looking for outside of wrestling.”

Wrestling is still top priority for the Knockouts Champion though. And through her ever-improving in-ring skills and dedication to her craft she seems to be slowly building a bigger and bigger fan-base along the way.

“I do think that [the fans] are taking me a little bit more seriously,” she said.

“I think I came in and I shocked people. I think that I did improve a tremendous amount in a short period of time but that’s just all the work that I was putting in.

“I think for a while I’ll fight the whole stereotypical ‘Oh she’s just a model’ and I’ll continue to keep proving everyone wrong but I think right now I’ve opened everyone’s eyes to say ‘Oh wow, this girl she can work and get in there, she isn’t scared.’