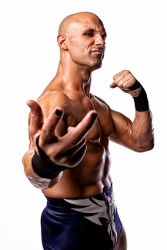 Many members of the TNA roster dream of the day they can have their defining Bound For Glory moment. Christopher Daniels will remember 2012’s event staring up at the lights following a Border Toss from Hernandez while Chavo Guerrero came crashing down on top of him with a frog splash to end the three-and-a-half month tag team title reign of he and Frankie Kazarian.

Without the titles to hold them together, it would be tempting for the former “world tag team champions of the world” to go their separate ways – as so many other teams do – but the Fallen Angel aspires to hold gold once more and return TNA’s tag division to the all-time heights it knew when Beer Money or the Motor City Machine Guns were competing.

“When Frankie and I got together and decided to try and be a tag team I had no idea that we were going to get so successful so quickly,” Daniels told a media line-up on Thursday, “but because we’ve been friends for the better half of 15 years I knew that we had a chemistry that would translate well in the ring.

Daniels first met Kazarian when he relocated to Southern California from Chicago’s Windy City Wrestling and began training out of Jesse Hernandez’s School of Hard Knocks.

Once the two became regulars with TNA Wrestling their shared background brought them closer together and they soon became friends – a real-life bond apparent to anyone who watches the duo on Impact Wrestling.

“I’m absolutely having the time of my life and I know Frankie’s doing the same thing,” Daniels said. “We’re actually just going out there and being ourselves. We’re very sarcastic, very snarky. We play off each other very well. We’re like the Statler and Waldorf of TNA. We’re bringing that to television every week.”

Daniels and Kazarian’s sense of humour has struck a chord with TNA’s creative team too. The pair has been working alongside the creative team to take charge of their own segments on Impact Wrestling and at TNA live events, Daniels said, swinging at every pitch thrown their way.

Both men are responsible for their own characters as much as possible, trying out all sorts of ideas to see what will take off with the TNA audience.

“Frankie and I, we come up with our own stuff,” Daniels said. “The appletini, the scarf, the GFY glove – those are all things that I try and see if they suck. I’ve been lucky in the sense that most of them have gotten over with the audience.  I can’t go anywhere in terms of live events without someone asking me where my appletinis are.” 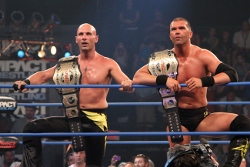 While a drink is all well and good after the show, it is of the utmost importance for Daniels to be in control of his actions inside the ring, which means staying sober before the bell.

“I just want everyone to know that it’s very rare I drink and wrestle,” he said. “You really shouldn’t do that, so please don’t. Be responsible in your beverage taking, everybody.”

Daniels and Kazarian have been allowed to flourish creatively outside of the Aces & Eights storyline which has dominated TNA programming over the past couple of months (“I think this Aces & Eights storyline was always going to be one that directly affected the good guys here in TNA, and as anyone can tell right now, Frankie Kazarian and myself are as far from being good guys in TNA as we’ve ever been”) but the duo were a driving force behind another of TNA’s major stories for 2012, the controversial Claire Lynch angle.

“I think it did as good as it was going to go – it was a gamble to put someone in that position, in that character, that wasn’t a wrestler,” Daniels said.

“I’m sure that she [the actress portraying Claire Lynch] was surprised by the reactions to some of the stuff and it sort of prompted her to go her own way a lot earlier than we had expected.

“In that respect we possibly could have prepared her a little bit better, given her a better idea of what she was in for.

“At the end of the day the main goals of that storyline were to make AJ Styles more virtuous, more of a good guy, and to make myself and Frankie Kazarian seem more dastardly and more evil, and I think when you look at the end result of all that those two goals were met.”

Could it have gone better?

“Sure, of course – you don’t know how things are going to go when you walk down that aisle to the ring but … at the end of it all we were the bad guys, AJ was the good guy, that was what we were aiming for.”

As Claire Lynch left TNA, Daniels and Kazarian’s feud with AJ Styles began to subside. In its place rose a new rivalry with the men they will wrestle for the TNA World Tag Team Championships at Turning Point, Chavo Guerrero and Hernandez. 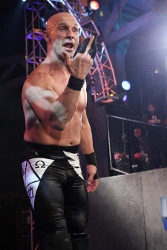 “I think Chavo’s one of the unsung best in professional wrestling, he’s so talented and he’s so experienced, I see a lot of similarities between he and I,” Daniels told NZPWI.

“It was funny, some of the people backstage – the first time Chavo and I worked was a couple of weeks ago. The first singles match we ever had was on television a couple of weeks ago and people were surprised that two guys who have been wrestling close to 20 years each had never crossed paths.”

Daniels has an impressive collection of accolades from his 20 years in the business: Eight tag team championships in TNA (plus another two in ROH); three runs with the X Division Championship; a ROH Television Championship; a five star match against AJ Styles and Samoa Joe at Unbreakable as ranked by the Wrestling Observer.

Yet for all his accomplishments, the Fallen Angel has never been world champion – something Daniels mentions three times in the space of Thursday’s 45-minute conference call.

“I feel like everybody gets into this business wanting to be the best in the world, wanting to be the top guy in whatever company they end up working at, and that’s where I am right now. I still want to be a world champion, even 20 years in I still have things that I want to do.”

While Daniels is focussed on bringing the TNA tag team titles back to he and Kazarian tomorrow at Turning Point, seeing wrestlers like Bobby Roode and James Storm come from tag team backgrounds before taking home the TNA World Championship is a promising sign that the world title may not be too far out of reach.

“Right now, the work that I’m doing, I’m closer to being world champion than I’ve ever been. I think it’s just a matter of circumstances and opportunity,” he said.

“If it doesn’t happen I would have to be honest with myself and say that I’ve had a very successful career but I still think there’ll be a little bit of that ache of not being world champion, and I’m going to try and rectify that in the months to come.”

Tables, Ladders, and Chairs take centre-stage at the final WWE pay-per-view of the year when Drew McIntyre defends the WWE...