NZPWI had the opportunity to speak to Bobby Roode this past Friday in the lead up to TNA Genesis, the company’s first pay-per-view event of 2013.

Roode spent most of 2012 as the TNA World Heavyweight Champion, before losing the title to Austin Aries at Destination X.

The former champ will challenge both Aries and current TNA World Heavyweight Champion Jeff Hardy in a three-way dance in the main event of Genesis.

NZPWI’s David Dunn spoke to Bobby Roode moments after the “It Factor” had finished taping Impact Wrestling on Friday afternoon.

Roode discussed holding the World Heavyweight Championship, not being named Impact Wrestler of the Year for 2012, custom championship belts, TNA’s recent decision to hold only four live pay-per-view events per year, and more in this exclusive interview.

David Dunn: Hello Mr Roode, how are you today?

Bobby Roode: Hello, how are you?

I’m good, thank-you. We last spoke to you on NZPWI in November of 2011 and you’ve gone through two significant changes since then. First of all, you’ve had a haircut. How are you finding having shorter hair when you’re in the ring?

In the ring I kind of miss my long hair sometimes but I don’t miss it any other time. Having to wear it back in a ponytail every single day for nine years can give you a headache, I found out. The only time I actually wore it down was when I was in the ring, so every other time, because my hair is so curly, I had to wear it back in a ponytail, so it actually feels great to have short hair for the first time in a long time. I’m liking it. 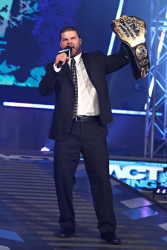 In a way it did. Obviously being the world champion there was a lot of extra, added pressure but it was pressure I that I enjoyed. After losing it, after when I’ve held it for such a long time – I think it was eight months – it was like I’d lost a piece of me. I’ve been on a quest to get it back ever since and hopefully, come Genesis, I’ll be able to regain my world heavyweight title from Jeff Hardy in the three-way match with Austin Aries. We’ll see what happens. I’m going into the match very confident and I’m hoping to kick off 2013 in the right way.

How do you think 2012 went for you? Obviously you lost the World Heavyweight Championship, but it was a big year, wasn’t it?

It was a huge year for me. Obviously my first world heavyweight title run… being able to hang on to it for as long as I did and set records and make history as the longest reigning World Heavyweight Champion obviously meant a lot to me, and to the company. It took our world title, in this company, it took it to a different level and made it important. I’m glad I was the guy who was able to do that. You win some, you lose some, and I’ve been without my world title now for almost six months. That’s just way to long. So hopefully, like I said, hopefully Genesis will be my night and I’ll be able to take back what’s rightfully mine.

Do you think you should have beaten Jeff Hardy for the title of Impact Wrestler of the Year?

Absolutely, I definitely do. I set records, 2012, I set records, I made history. I was the longest reigning World Heavyweight Champion ever in this company, and being able to hold on to that title in 2012 for seven months of 12, that’s a pretty big statement. Taking nothing away from Jeff Hardy, but Jeff Hardy didn’t beat me for the world title. He had a good year but I had a great year. I truly believe that – obviously you let the fans vote, so that’s mistake number one. I don’t think I have a lot of fans. It is what it is but I think we all know who the real winner of that is, and that’s me.

You’ve got the chance to take the title back from him at Genesis, this Monday on pay-per-view in New Zealand. What do you think of the physical belt that Jeff Hardy’s got, his custom championship, what do you make of that?

It really doesn’t mean much to me. The only title that means anything to me is the actual world title, and he possesses that as well. It’s winner-take-all, and if I happen to be the guy to beat Jeff Hardy and Austin Aries this Sunday then I could care less about Jeff’s belt. He can keep it for all I care. The only thing that I care about is the real deal and that’s the world title. As far as I’m concerned it’s mine and I deserve to have it and I will have it.

So there’s no chance we’d see you implement a custom championship of your own if you were to win?

I’m not saying that – maybe someday down the road – but right now the only thing I’m focussed on is winning it back. 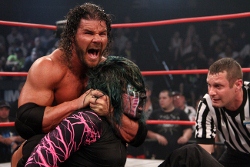 I did a little bit of research before this interview and you’ve got victories at Genesis 2009, 2010 and 2011 as part of Beer Money, and then last year you retained the world heavyweight title against Jeff Hardy, so does that make this a bit of a special event for you?

Every event is special for me, whether it’s a live event or Impact taping or a pay-per-view. Every night is a big night for me. Obviously you have done some research; I didn’t know that, I’ve been pretty successful at this pay-per-view. It’s something to definitely keep in mind walking into this match on Sunday. History itself really doesn’t matter to me, what matters is the here-and-now. I have an opportunity coming up a Genesis to become a world heavyweight champion again and I’m planning on doing that.

Finally, what do you reckon the chance is of you and everyone else at Impact Wrestling coming down to New Zealand for a live event any time soon?

We’d love to have you down in this part of the world so fingers crossed indeed. Thank-you very much for your time today, Bobby. It’s been great talking to you, and all the best for Genesis on Monday.