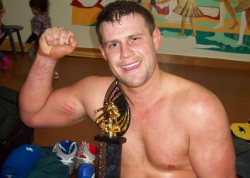 “The Shooter” Shane Sinclair returns to Wellington with the Hughes Academy Trophy after defeating T-Rex, Charlie Roberts and Inferno on Saturday night.

Sinclair utilised a heel hook to forced T-Rex to submit in his quarter final match with the Storm Wrestling Academy graduate.

“The Shooter” would live up to his nickname yet again when he submitted Charlie Roberts with the heel hook in semi-final action, setting Sinclair on a collision course with Inferno in the night’s main event.

Inferno proved to be Sinclair’s toughest opponent as he dictated the pace of the final match in the Hughes Academy Trophy tournament.

Furthermore, Inferno honed in on Sinclair’s arm, which had been damaged during his semi-final match with Charlie Roberts.

Inferno wrapped Sinclair’s arm around the top rope and jarred it when he dropped to the floor before returning to the ring to stretch the rules with a series of illegal holds – which he would break just before the referee’s five count.

Sinclair began to rally back against Inferno only to be dropped with a DDT as he attempted a hip toss.

With Sinclair now on the mat, Inferno applied the Cinder Lock in the hope of making Sinclair tap out.

“The Shooter” did not give up and managed to break the hold, leaving Inferno without a plan of action.

Sinclair exploded with a Techniplex in the middle of the ring while Inferno tried to regroup, and covered the former KPW Champion to take out the win and the Hughes Academy Trophy.