by David Dunn
in Blog
0

We’re covering 10 different matches featuring 13 different superstars held at seven different WrestleManias over the past decade. Will your favourite make the list?

Our countdown continues with The Undertaker in the rare position of perhaps being considered an underdog heading into WrestleMania, thanks to a maniacal World Heavyweight Champion looking to do anything it took to retain his title.

Coming in at number nine, it’s Edge defending the World Heavyweight Championship against The Undertaker in the main event of WrestleMania XXIV. 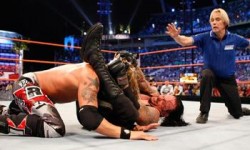 Undertaker’s streak is the stuff of legend, an historic, unobtainable 21-0 at WrestleMania.

Back at WrestleMania XXIV when Undertaker had just 16 victories to his name though, there was one other man who could lay claim to WrestleMania being his event.

Edge had quietly amassed a streak of his own, with five WrestleMania wins before being stretchered from the ring during WrestleMania 23’s Money in the Bank Ladder Match. Although not a win, Edge had still never been pinned or made to submit at WrestleMania, and with Undertaker’s record bolstered with a questionable disqualification win over Giant Gonzales, both men’s records were still somewhat comparable.

For once, Undertaker would not be the obvious favourite when he stepped in the ring to face Edge, and with the Rated-R Superstar heading into the main event as the reigning World Heavyweight Champion, never before had Undertaker faced a more serious threat.

WrestleMania XXIV was about more than just business too. Although he hadn’t won the Money in the Bank Ladder Match, Edge did manage to obtain the contract from Ken Kennedy, and cashed it in on The Undertaker after a gruelling cage match with Batista and an attack from Mark Henry, taking Undertaker’s title midway through 2007.

WrestleMania XXIV began with the Florida sun beating down on the Citrus Bowl but when it came time for the main event things had cooled significantly enough to set the stage for an epic clash between two red-hot rivals.

Edge would try it all to retain his title, including interference from a pre-Long Island Iced Z Zack Ryder and Curt Hawkins, the Edgeheads.

Undertaker managed to dispose of both men with chokeslams to the outside and eventually the match boiled down to just Edge and Undertaker, slugging it out one-on-one for the World Heavyweight Championship.

After a back-and-forth exchange Undertaker would debut the Hell’s Gate submission hold and force Edge to tap out or black out in centre-ring, ending his first WrestleMania main event in more than a decade as the new World Heavyweight Champion.

After being demoted from the main event spot at WrestleMania 23, his win over Edge signalled Undertaker’s return to the forefront of the company, and even in defeat Edge proved he had arrived as one of the franchise players in WWE.

Roman Reigns’ odds of retaining at WrestleMania have plummeted. The Universal Champion will now defend his title in a triple...