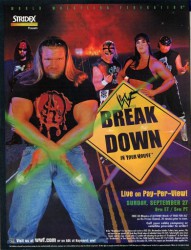 It’s about that time again, your weekly dose of wrestling’s past: Throwback Thursday. September 4 is a day rife with wrestling history; from Georg Hackenschmidt’s championship matches in the early 1900s, to the birth of Jerry Jarrett in 1942, to the third annual King of the Ring event in 1987, to the beginning of the Monday Night Wars in 1995.

However, of all the potentially great visual moments from those listed—maybe not Jerry Jarrett’s birthing so much—I can speak authoritatively on none of them. Why? Because the WWE Network does not have any of those events as a part of their substantial library. So, for the sake of this week, we must travel to the future of the past (stay with me): WWE’s In Your House pay-per-view series continued on September 27 of 1998 with the momentous, yet one time only, Breakdown.

The quick results are as follows: Owen Hart defeated Edge; Al Snow and Scorpio (with Head) defeated Too Much (with no genetic connection to Jerry Lawler, seriously, we promise); Marc Mero (with Jacqueline) defeated Droz; Bradshaw defeated the man they call Vader in a falls count anywhere match; D’Lo Brown (with Mark Henry and vest) defeated Gangrel (with red viscous substance that we shouldn’t call blood to stay on the air); The Rock defeated Ken Shamrock and Mankind in a triple threat steel cage match to determine the number one contender for the WWE Championship; Val Venis (with Terri Runnels) defeated Dustin Runnels (without Terri Runnels); Billy Gunn, Road Dogg and X-Pac defeated Jeff Jarrett and Southern Justice; Kane and The Undertaker defeated “Stone Cold” Steve Austin for Austin’s WWE Championship.

Although exact dates for the occasion of the WWE Attitude Era are disputed, it’s safe to say that this event occurred towards the beginning of that era. The superstardom of Steve Austin and The Rock had begun to explode, The Brothers of Destruction were in the midst of what would become a decades-long rivalry, Christian debuted at the beginning of the evening, and D-Generation X was on fire. However, it certainly wasn’t the high point of the Attitude Era.

This event lacked the great tag team wrestling that helped define the era, with The Hardy Boyz and Kaientai only appearing on the pay-per-view pre-show, The Brood only showing the first signs of connection between two members, The Dudley Boys not even employed yet, and Too Cool being just too much (see what I did there?). It also lacked any women’s wrestling and relied on the ladies for nothing more than eye candy.

I think it was because of this lack of taking tag teams and women’s wrestling seriously that I didn’t entirely enjoy the event. I enjoyed some of the brawling, but that was the majority of the matches. It doesn’t matter who you are, it’s impossible to watch brawling for near three hours. In fact, the only match that didn’t seem to focus on brawling was the opening about between the veteran Hart and the rookie Edge. The two put on an entertaining match, but it wasn’t enough to build up for two-and-a-half hours of fisticuffs.

Despite my criticisms surrounding the wrestling, this was clearly a show used to build stories. Furthermore, they are some of the most entertaining stories to ever come out of wrestling. And in the end, we were treated to a moment that would be etched in wrestling history for decades to come: the image of The Brothers of Destruction simultaneously pinning WWE Champion “Stone Cold” Steve Austin, and causing Mr McMahon to get a level of victory over his arch nemesis.

When Goldberg returned to Raw on Legends Night, he had one reason in mind. The Hall of Famer went straight...

When I think of dream matches my mind flicks to clashes of generations like the Golden Era's Hulk Hogan facing...