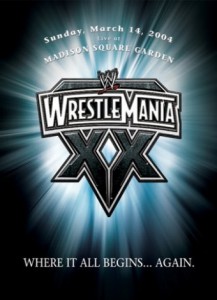 While I would love to watch many of those championship changes—or any of the dozens I haven’t mentioned above—we will look to another championship change and continue instead with our origin stories on our road to WrestleMania. As we build towards the showcase of the immortals, we have a look at this year’s WrestleMania card before rewinding to the genesis of some of this year’s main acts. This week we place our focus on the dynasty, the face of professional wrestling over the last decade, and the man who once called himself The Doctor of Thuganomics, John Cena, as he makes his WrestleMania debut at the 20th instalment of the event.

Just to quickly recap my thoughts on the event as a whole, this event is probably worth watching for the main event alone, if for nothing else. There are plenty of filler matches, but the end of this WrestleMania features arguably the most iconic moment in professional wrestling history.

As for the initial match featuring John Cena winning his first opportunity to declare himself ‘The Champ’, it’s not exactly a classic. In saying that, it was never going to be with The Big Show. The point of this match was to show how strong Cena was, to too warm up the crowd with his charisma, and to prove his potential. As far as that’s concerned, this match achieved all of its objectives.

This was a fun match in which Cena was able to prove that he belonged with the big boys. At this point in time, The Big Show was a monster of a wrestler, someone worth beating. Not only did Cena beat The Big Show, but he did it in a fun way that was somewhat unique to Cena’s character. It wasn’t simply about a good guy cheating to beat a bad guy—Eddie Guerrero had already mastered that technique—but it was about doing it using Cena’s own style. This was the match that proved Cena was his own man and could be so at the top level.

While he would become a man who would receive divided recognition in a few more years, he was still loved by absolutely everyone at this point; and rightly so. He was never intended to be a technically renowned athlete and he didn’t make any attempt to be. He didn’t have the Five Moves of Doom, and had to rely on guts, strategy, and determination to score the victory. By doing that, he allowed the crowd to fall in love with him and give a great start to the greatest spectacle in professional wrestling.