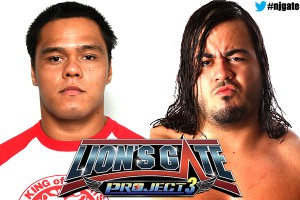 The 23-year-old, formerly known as Aaron Henry, will be part of the Lion’s Gate Project 3 event in Tokyo, Japan.

Henare is now one of three Kiwis on the NJPW roster alongside Bad Luck Fale and Jay White.

Henare has been living and training as a “Young Lion” in Tokyo. He was visible at ringside during several of this year’s G1 Climax events.

Back in New Zealand to renew his visa, Henare was featured on Maori TV.

“[Japanese wrestling is] something different—a lot harder hitting—so I wanted to pursue that,” he told Te Kaea.

His Lion’s Gate Project 3 match is the first of many for Henare, who will be in action throughout September in the lead-up to three featured NJPW Destruction events.