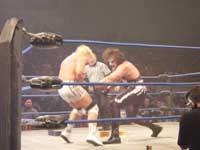 NWA:TNA Champion Jeff Jarrett defeated WWA Champion Sting to unify the titles in the main event at WWA The Reckoning this Sunday night. A short series of run-ins involving Joe E Legend and a swerving Rick Steiner saw Jarrett claim victory in the first ever pay-per-view ever to be filmed in New Zealand.

In what may have been his WWA swansong, Sting wowed the crowd with his trademark Stinger Splash and Scorpion Deathlock before the short spate of interferences that cost him his WWA Championship.

Earlier on in the night Sting made a surprise appearance atop a scaffold high above the arena to lay down the challenge to Jeff Jarrett. Later on, Jarrett replied via the video screens.

WWE legend Bret “Hitman” Hart was too fatigued to perform his scheduled duty as special guest referee for the main event, however he took the time to come into the ring during the show and after a rapturous round of applause and cheers, he spoke openly about life after the stroke, and of his brother Owen and the recent deaths of some of his old workmates in WWE and WCW, including the most recent fatality, Miss Elizabeth. 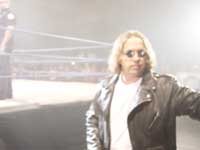 Former WCW and WWE Superstar Rick Steiner defeated Mark Mercedes, whose constant hyping of Australia and disrespect towards New Zealand had the crowd baying for his blood, perhaps due to his horrible timing being that his outburst came shortly after a local Maori group had performed a fierce haka to open the show.

Chris Sabin outlasted three other men, including ECW legend Jerry Lynn, to unify the WWA Cruiserweight and NWA:TNA X-Division Championships. In what was regarded as the match of the evening, Sabin seized his opportunity and claimed the titles after Lynn, Frankie Kazarian and Johnny Swinger took each other out.

Wrestling has taken me through every emotion under the sun in the 35-plus years I’ve been watching it - the...