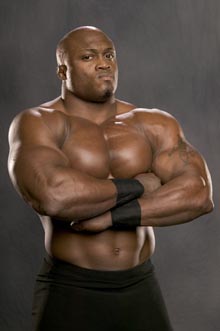 Few Superstars make as big an impact on debut as Bobby Lashley did when entering SmackDown.

A three-time wrestling National Champion, four-time All American, two-time Armed Forces Champion and a Silver Medalist at the CISM World Championships, Lashley has an amateur pedigree as good as any in World Wrestling Entertainment.

The 6′ 3″ 275 pounder qualified to be a part of Team Smackdown at Survivor Series 2005, an impressive feat by a relative newcomer. He also made waves in the Royal Rumble, before coming unstuck when Kane and The Undertaker had their way with the impressive star.

Lashley even held a long undefeated streak until recently losing to JBL at WWE No Way Out 2006 (thanks to Finlay).

NZPWI Editor Dion McCracken had the pleasure of conducting one of the very first media interviews with Bobby Lashley for a piece featuring in the March 2006 Skywatch Magazine.

Dion McCracken: Is it exciting for the boys to be breaking into a new country with a live event like New Zealand?

Bobby Lashley: Yes, especially a country as New Zealand, I’ve heard a lot of good things about the fans in New Zealand and I’m looking forward to wrestle there to see what the crowd is like first hand. 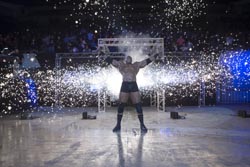 Can you describe the atmosphere of being at a WWE Live Event?

It’s a very fun and high energy atmosphere, the crowd plays a major part and the more the crowd gees us on the more we gee them on so we play off each other. We make it exciting for them wherever we are.
Q: What do “non-wrestling fans” get out of a WWE Live Event?

A great time and a new passion, a new passion being the WWE. The whole show and production is breathtaking and you get to see and experience the wrestling first hand.
Have you yourself traveled to New Zealand before?

I have never been to New Zealand and I can’t wait to come.
You’ve got an impressive background in amateur wrestling; a three time College National Champion, four time All American, two time Armed Forces Champion and a Silver Medalist at the Military World Championship. What made you so successful in the amateur ranks?

My pursuit for excellence, I give a 100% of everything I have in everything I do. From a young age I have always wanted to be a Wrestling superstar and I did in amateur ranks and now I will do it in the pros. Wrestling is my calling, therefore I will be a champion in the WWE someday soon.
Was becoming a WWE Superstar always a goal for you even in your amateur days?

Absolutely, I grew up watching the WWE and I’ve always been a fan and I always dreamed that someday after my amateur career I would be able to wrestle in the square circle – the biggest show on earth – the WWE.
You must be looking forward to testing your skills against Kurt Angle now that he’s on the SmackDown roster?

Of course, yes – I’ve always dreamed of battling against Kurt as I know it will be a great match. It would be even if he didn’t have the title but now he has the title there is even more incentive , so when this match happens a lot of questions will be answered.

You signed your WWE Developmental Contract in 2003 and were assigned to OVW. Tell us a little about the OVW system and how it grooms athletes into WWE Superstars.

OVW is a strong training school and I learned a lot whilst training under some great instructors. No one can go straight into the pros and be ready but OVW will set you in the right direction. Although it grooms wrestlers for the WWE, it’s still quite an experience when you first get to WWE.

Your first WWE television match came in September 2005 against Simon Dean and you immediately made fans sit up and take notice with your size and impressive skill. Are you happy with how these first few months of your WWE career have gone?

Yes I am – it’s a dream come true. everything is going in the right direction and I just hope and pray that it continues like this and as I said before I will do everything I have to be successful in this business and will give it 100%.

Just a few weeks later, you became a part of Team SmackDown at Survivor Series. Being included in that team of Superstars must’ve felt like a very approving nod by the WWE?

I wasn’t actually given the spot, I was given a chance for it. I then seized that chance by winning a match. It was an honour wrestling with and everyone against everyone in that match.

One of the most memorable moments of the recent Royal Rumble match was seeing you squaring off against Kane and The Big Show. Two questions – one; how was it competing in the Rumble and two; is it hard not to be intimidated when standing in the ring with guys like Show and Kane that you yourself have presumably followed over the years?

From the looks of those two, it can and should be intimidating but I am on a mission – there are big guys in the WWE and for me to be successful I must be ready to take on anyone. The royal rumble was like a rush of energy when I first went out – I didn’t know what to expect and it was an incredible experience. I also know more what to expect and at next years Royal Rumble I won’t make the same mistakes that I did this year. 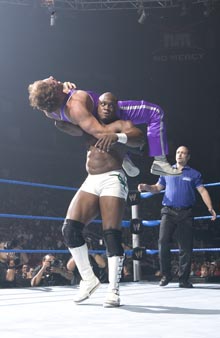 Many have compared your style to that of former WWE Champion Brock Lesnar. How do you feel about being compared to someone like Brock?

To be honest, I don’t try to be like anyone and I don’t mimic anyone’s style. Brock was a great champion in his time but I have something to offer everyone, that has not been seen and cannot be matched.

Without a doubt you are “the real deal” and ironically “the next big thing”. How far do you see Bobby Lashley going in the WWE? What are your goals?

Like I said before I set my sights very high, my goal is WWE world heavy weight championship, and nothing short of that will do.

Bobby Lashley speaks to NZPWI, interview to feature in Skywatch

NZPWI Editor Dion McCracken spoke to up-and-coming WWE star Bobby Lashley over the weekend. The interview is part of a...