Westpac Stadium gives thanks to crowd and NZPWI 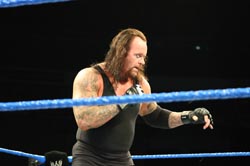 The WWE SmackDown Road to WrestleMania 22 tour event which took place at Westpac Stadium this past Saturday has proven to be a roaring success for all involved.

Westpac Stadium Marketing Manager Steve Thompson puts the SmackDown event up there as one of the best shows the facility has hosted.

“It was one of the best events that has ever been held at the Stadium and we rate it along side the International Sevens as an event that we are extremely proud to host this summer.

“The crowd was brilliant and the feedback that we received from the WWE talent and management was that they were blown away with the response and enthusiasm generated by the fans. They remarked that the NZ fans were much more vocal and ‘into it’ than the previous night in Sydney.”

Mr Thompson went on to say that the WWE Superstars were amazed at the size of the venue and the ring-stage setup when they first entered the Stadium.

“Holy Cow, this is a coliseum, not an arena,” was one of the WWE stars’ comments.

“After the reception they received from the fans they are very keen to come back to NZ,” Mr Thompson said.

“It was one of the most hyped and best behaved crowds we have ever enjoyed hosting and I would like to thank all the fans who traveled from all over the country and helped make it such a special night.

“And I would especially like to thank Dion and NZPWI for their enthusiasm and support during the three years of negotiations that it took to make WWE Live in NZ a reality.”