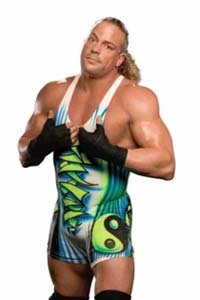 In February 2007, NZPWI Editor-in-Chief Dion McCracken co-hosted a “WWE in New Zealand” special which featured on SKY Television. Thanks to SKY TV, NZPWI readers can now see the full, uncut interviews for the very first time beginning with Rob Van Dam – a man set to hit New Zealand later this month at the Armageddon Expo!

Then a member of the active roster, Rob Van Dam was rumoured to be on his way out of World Wrestling Entertainment. With the new Extreme Championship Wrestling far from the promotion that this ECW Original was a part of, all signs pointed to a shift to TNA or out of wrestling altogether.

With one of the most unique offensive games in all of professional wrestling, Van Dam wowed audiences worldwide before leaving the sport in July 2007, his future in the business uncertain.

In this interview, Van Dam talks about his match against John Cena at ECW One Night Stand, Bobby Lashley as (then) ECW Champion, the Hall of Fame and much, much more!

Take us back to last year’s ECW One Night Stand, against John Cena. What was the atmosphere like in that building?

That was a unique experience that has never been in place before, and I’m sure hasn’t been duplicated since, because everyone in the Hammerstein Ballroom was all, so behind me. Because I stood for ECW, for the old ECW, it was very symbolic. John Cena stood for the WWE, which to those fans, was something that they really wanted to see snuffed out.

The new ECW, it’s different, if you haven’t caught on by now a lot of people realise it isn’t really quite the same as the old ECW. But at One Night Stand it was still very fresh, it was the old ECW brought back in today’s time, and that match with John Cena, for the WWE Championship, was a highlight of my career, for sure. 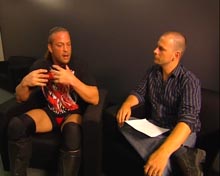 Well you won the Championship that night of course; even now, has it sunk in that that’s a belt that some of your heroes, like Randy Savage for example, have held in the past?

I actually don’t spend too much time thinking about stuff like that. As a matter of fact – a lot of people don’t know this – some of my fans have pointed out to me that I have had more championship belts than anyone else in WWE. I’ve read recently that out of all the world champions, I’ve had more belts than any of the other world champions, and now I’ve been told that I’ve had more belts than any other WWE superstar, which of course includes the Hardcore title, the European title – which was put to rest, so no-one can get that one – both tag team titles, Intercontinental title… of course, the ECW title, and the WWE title. So that’s a lot, and I’m sure that a lot of wrestlers have held a lot of those championship belts, and I’m here doing it my way.

Do you think the average fan appreciates how much work’s involved in being a WWE superstar?

The average fan I think has a great appreciation for what we do, but I don’t think that they really know. I think that they’re ignorant – not by choice – they don’t really acknowledge, or they don’t have the information, it’s not really put out there, how much work we do. Not just every single night, like what goes into going out there into the ring, to have the match, and to walk out of there making sure the people are happy and they got their money’s worth – besides that, the fact that we do it almost every night. A lot of the fans in New Zealand have been asking me today, “you guys have to wrestle tomorrow too? Oh my God you’re going to be so tired,” and I’m like yeah – we left Wednesday to come here, Tuesday we were in San Diego, Monday we were in Bakersfield California, Sunday we were in Los Angeles, that’s how we roll every single week. And I think that a lot of the fans would have a different kind of appreciation if they realised that’s what we really do. It’s obvious to see that what we do in the ring is something not everybody can do – especially when RVD’s in the ring – it’s actually very important for me, the people that watch me, know that they couldn’t survive what I do on a normal night, but a lot of them don’t know that it’s almost every night of the week, and it’s 52 weeks a year.

Yeah, definitely a heckuva lot of work involved, but do you still feel like you’re living your dream?

Heh. Um… well, I’m at a different stage of my career now, I’ve been doing this 17 years… and I don’t plan on being in the ring when I’m 50, like Ric Flair – as a matter of fact, because a lot of the fans have come to appreciate my physical gifts – my acrobatics, my abilities, my moves – that’s something that I always want to stand for, so in fact I plan on getting out of it before you’re watching and saying “remember when RVD used to do the Rolling Thunder? Or what’s that, a 3-star frog splash he does now?” I plan on getting out before then. And so I’m still living the dream that I wanted when I was younger, but now I’m in a different position, and getting towards the other end of that line.

You’ve definitely got a unique move-set just as you said; do you really need to stand out to make it in the big leagues?

Absolutely. Absolutely. And even so, there’s no guarantees. But even to go to a wrestling school, the odds are so much against you, even landing a job on the bottom of the pole. And it was like that back in ’89 when I got into it, but there was a lot of different wrestling organisations, different territories you could go to. Now the business has changed so much, in the United States it’s become almost monopolised to where the WWE is the conglomerate of professional wrestling, and it is. There are a few other groups, but WWE is up here, they’re way down there by all standards: exposure, prestige, money, anything that you would measure by. And the fact is, it’s great to be in WWE, and at the top. If I was going to advise anybody else that was trying to get there, I would definitely say to stand out, and don’t try to take someone else’s spot but create your own. That’s what the Sheik taught me, and Sabu as well.

How do you rate Bobby Lashley as ECW Champion?

Um… that’s a little confusing, because he’s so new, and he’s so fresh on the scene, and I had to kind of let go of all the hopes and the desires that I had to keep the old ECW flowing. That’s kind of a lost battle, and Bobby Lashley was the ECW Champion, after the chamber match that we had… December to Dismember…

… that was the night. That was the night, because up till then I’d been chasing that belt. I had the ECW belt, and then I lost it, and then Big Show had it, and then I was nowhere around main event, I had to work my way back up. And then I started going after the Big Show, and I was beating him, and everyone saw that I could beat the Big Show, and that ECW belt belonged to me because of the history, and the work that I’ve done since back in ’96 when I originally joined ECW, so now, there’s this new breed, right, and it was like, the original ECW rosters don’t really care that much for the new breed, you know, but it’s a little bit of adapting, we have to make everything work, so now it’s very apparent even on the front, on the show, that there’s the new breed. Bobby definitely represents the new breed. 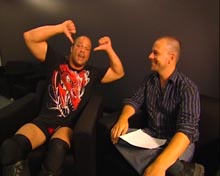 Do you think we’ll ever see Rob Van Dam in the Hall of Fame one day? Is that something you’d aspire to?

I don’t want to say never, you know, but that’s not something that I picture as happening. I take all the success that comes to me as I get it, but I never really have high expectations for what other people are going to bring to me. Whatever I can go out and get for myself, I got all the confidence in the world. I can go out, I can make it happen. Something like that, I have to be held in high regards in someone else’s eyes, you know? So it would certainly be an honour.

All right cool, appreciate it.

It’s about that time again, your weekly dose of wrestling’s past: Throwback Thursday. November 13 isn’t exactly a day that’s...