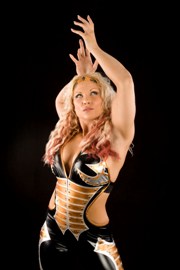 It was NZPWI’s privilege on Friday morning to speak to the WWE Women’s Champion, the Glamazon, Beth Phoenix.

Having wrestled both men and women throughout the States and Canada before undertaking training in OVW, Beth has garnered a reputation for her toughness, her strength and her ability. A broken jaw five weeks after her Raw debut didn’t hold her back; she returned with more ferocity and determination than ever.

Due out here as part of the Raw tour in July, Beth spoke to NZPWI Editor Kirsty Quested about her excitement at seeing New Zealand for the first time, her vision for women’s wrestling and much more.

Kirsty Quested: Hi Beth, how are you?

Beth Phoenix: Great, how are you Kirsty, what’s up?

I’m really good, it’s great to speak to you.

So tell me, will this trip out to New Zealand in July, will this be your first time out in this country? 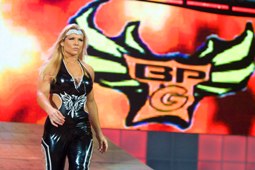 Take us back to your time in OVW. How did you find the training?

Well, I actually got a couple of connections there to where I met the owner, Danny Davis, and Molly Holly, a former female wrestler, was a friend of mine, and she got me an opportunity for a tryout. I went down there and worked out in front of the head of the school, and he gave me an opportunity to come and train, but I didn’t earn a WWE contract until a couple of years later. So I went down on my own dime and paid to train, just like several others of the lower classes of professional wrestlers.

Now, Santino Marella is actually not the first man you’ve wrestled. In fact, if I have my research right, you defeated 14 men to win a Battle Royal in Canada a while back. Is that true?

This was before my WWE career, I did travel quite significantly throughout the States and Canada, before I joined WWE, and the competition as far as women went was a little scarce in the area that I wrestled, so oftentimes I mixed it up with the men.

And what do you think of it, getting to wrestle with the guys?

It’s difficult and challenging, but most of all, I go into it, and I’m usually underestimated, you know, most guys brush it off, or want to laugh me off, and that becomes my greatest advantage because they underestimate me and what I’m capable of, and that’s when I can usually take an opportunity and show them who’s the boss.

There’s quite a bit of debate around inter-gender matches; what are your thoughts on them?

You know, I’m the Women’s Champion right now, and I’m very proud to represent the women’s division, but myself, I will take on all contenders, male or female or whoever, but I understand the WWE’s position in keeping each division into their own, and I’m quite happy where I’m at, sitting at the top of the heap of the ladies, but you know like I said, you never know in the future what guys may need to get schooled a little bit by the Glamazon.

You debuted on Raw and just a few weeks later you were injured, you broke your jaw. That must have been frustrating?

It was. Wrestling for Monday Night Raw was a lifelong dream for me, and it was over, within five weeks. I can’t imagine a more heartbreaking story than that, for myself… but you know, what happened was basically, I worked so hard to get there the first time, that I wasn’t about to let that slip away from bad luck. So what I did was just set my mind to coming back badder and bigger and stronger and faster than ever before, and lo and behold, I got a second opportunity, and I made sure that time counted.

Yeah, awesome. Your second opportunity, you came back to Raw in July last year, and in October you defeated Candice Michelle for the title at No Mercy. Is being Women’s Champion everything you thought it would be?

Absolutely. It was a childhood dream of mine. I remember writing in a journal as a little girl, what I wanted to be when I grew up, and it was Women’s Champion. I’ve always been focused on this in my life, and you know, it comes with great perks! I mean, you get great treatment, you go into restaurants and get free meals – I gotta say, life as champion is pretty good.

It must have been a bit scary to see Candice Michelle take that nasty fall off the top rope? 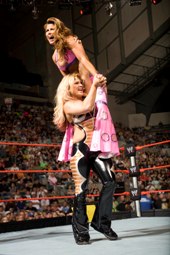 When you were in OVW you worked with some women who are now in TNA, like ODB and Serena – what are your thoughts on TNA’s Knockouts Division?

You know, I’ve wrestled just about everybody in their division aside from, I think, Amazing Kong, and their women’s division – I know how tough those girls are. And I give them kudos for everything that they’ve accomplished, and I take a lot of pride in seeing women’s wrestling develop and get bigger and better and get a greater fan base. So the better they do – I’m so happy for them, and like I said, for the other girls that I’ve faced in the past, I know how tough they are, and who knows, hopefully one day I’ll get to face them again in the WWE.

Since you defeated Santino in July, you’ve been working with him in the Glamarella storyline. How do you keep a straight face when you’re in the ring with him?

Well… unfortunately Santino’s antics usually leave me in a tough position, so I’m not always… while everyone else may find him amusing, unfortunately it usually leaves me to clean up the mess, so it’s not always entertaining. But Santino is an amazing guy, he’s so sweet off-camera, and just the most wonderful person you’d ever want to meet, and I’m very very lucky to have him in my life. He’s the one. The one I’ve been looking for. [laughs]

There seems to have been a shift in women’s wrestling lately in WWE – the girls aren’t just eye candy anymore. It seems to be harking back to the days of Trish Stratus, Lita, Molly Holly… would you like to see the women in WWE treated as serious athletes?

Absolutely. And you know, the shift in women’s wrestling is completely attributed to how hard our girls are working. You know, none of the Divas – a lot of our Divas have come from modeling backgrounds, and don’t have a wrestling background, but they’ve come in – like Kelly Kelly, and Candice Michelle – and really busted their butts, putting in extra hours, going to the training school, and when you see these Divas progress and get better and better and better, it’s completely up to their own moxie and how hard they’ve been working. So I think the sky’s the limit for the Divas. And I’m totally looking forward to being a part of it. And, to staying on top of the whole pile, basically! [laughs] 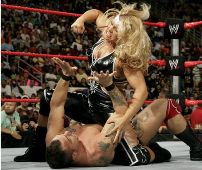 What’s something that fans would be surprised to learn about Beth Phoenix?

I actually do have an interesting fact: I, uh – [laughs] – I had a career briefly as a liturgical pianist. Which basically means I was the accompaniment for a church choir. So I have a background in piano, and I’ve played ever since… I could read music before I could read words, actually, and I helped pay for my wrestling school education by playing for masses and weddings and funerals on the side.

So, what does the future hold for Beth Phoenix?

Well, the future basically holds what I said when I came into WWE, and that’s I want to continue to raise the bar for women’s wrestling. I think – like I said, I’ve never put limitations on myself, I’ve never said this is where I’m gonna stop, and stop progressing, I’m Women’s Champion, that’s it for me, absolutely not. I feel the sky’s the limit, and like I said, I want to retire one day, and people to think of me as the girl that really, really changed the standards of what a WWE Diva should be.

Awesome. Well Beth thank you so much for your time today, we really appreciate your talking to us, and we can’t wait to see you out here in July.

Thank you, I’m so excited, thank you so much Kirsty, I appreciate it.

It was NZPWI’s privilege on Thursday morning to speak to WWE Diva Maria. From ditzy backstage interviewer to no-nonsense in-ring...