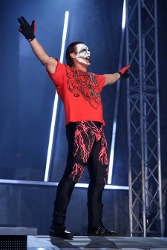 His NWA World Heavyweight Championship win against Ric Flair will always be one of Sting’s most memorable title victories.

“The first one against Ric Flair has to be one of the top ones,” he said, speaking to a media line-up on Thursday.

“That was Great American Bash in 1990 in Baltimore, Maryland and that was the first time, so that was huge.”

Sting took part in a conference call to promote TNA Slammiversary, where he will have an opportunity to become world champion once again when he challenges Bobby Roode for the title 22 years after his first world championship win.

After becoming NWA World Heavyweight Champion, Sting went on to feud with the Black Scorpion – a masked figure from his past who plagued the champ for much of 1990.

“The intrigue was huge, I think interest built and we definitely had some meat on the bones, but my worry all along was: who’s it gonna be?” Sting said.

“We had a list of names and not one of them we were going to be able to pull off and utilise, and my thing was ‘this thing is going to bomb because we can’t follow it, we don’t have an answer’, so my worst nightmare came true.”

The Black Scorpion was eventually revealed to be Ric Flair when Sting unmasked him following a steel cage match at Starrcade 1990.

“Ric was put into a situation that he didn’t ask for, but it’s like, ‘we can’t get choices A, B, or C so what do we do? Oh, let’s do what always works, let’s do Sting versus Flair’, and so that was the answer,” Sting said.

“Of course it wasn’t a bomb because Ric Flair was there. Ric is Ric Flair – my gosh, all kudos to him. Everybody knows the way I feel about Ric. He put me on the map. I love him. Mucho, mucho respect for him. I wanted the payoff to be there for the wrestling fans. And the payoff would have been… Ultimate Warrior, Hulk Hogan, somebody. Some big name.” 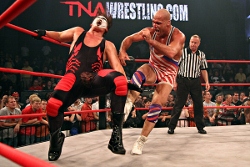 In terms of a more recent big name, Sting recalls his series of matches with Kurt Angle fondly.

“I think it was Bound for Glory in ’07, he took me to my limits that night … I have to say Kurt Angle, that one match in ‘07, that will go down in history for me as one of my better matches. It was pretty long and intense, we had a really good pace the whole night, and a year later I was still feeling that one.”

After nearly 27 years in the business, Sting has wrestled almost everyone, but one name he has yet to cross paths with is WWE’s Undertaker.

It was rumoured in 2011 that Sting would be headed to WWE to meet Undertaker in a match at WrestleMania XXVII. Negotiations eventually fell through though, surprising Sting.

“I guess the best way for me to tell you [how close I came to signing with WWE] would be on a scale of one to 10,” he said.

“I think the first three times or so over the years that I spoke to Vince McMahon and was supposed to be going over there we got up to about a six or seven. This last go around we were probably at about a nine. It was very, very close. I was actually surprised that things turned out the way they did.”

Having been with TNA sporadically since 2003, Sting could very well retire as part of the TNA roster.

“As of this moment – never say never in this business, right, we all know that, and wrestler’s honour means jack, it doesn’t mean anything – but I can tell you that for this moment right now as it stands I’m happy where I am, and if things continue the way they have I can see myself hanging my boots up right here.”

Whether that retirement will come any time soon though is anyone’s guess.

“Every year – honestly, this is not a bunch of wrestling gaga, this is the truth – every year I think ‘okay, this is it, this is it. I cannot physically go on any more’. But … Dixie [Carter] has been persistent, and I’m having a good time. And at the same time we’re growing, and we turned WCW into what we turned that into via the avenue of Monday Nitro, and I’d love to see the same situation here with TNA, and it’s kind of hard to walk away when we’re not quite there. Some people may think ‘they’re not going to get there’, but I think there’re a whole bunch of people out there who believe ‘oh yes, we will’. We’re getting ready to launch some new stuff, and you’ve seen little bits and pieces of it, and it’s only going to get better as time goes on.” 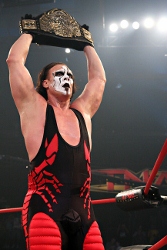 While Sting first thought retiring would mean stepping away from the business entirely, he is now starting to consider a backstage role with TNA when the time does come for him to hang up his boots.

“I’ve always pictured myself just being completely done with wrestling, and chances are good that’s the way it will be, but as time goes on here – I know the waves are definitely coming into shore, I gotta start thinking differently now – I’m starting to see things from the other side of the camera and take more of an interest there,” he said.

Sting attributes a lot of his longevity in the wrestling business to his faith, becoming a born-again Christian in 1998.

“It’s only by faith that I’m able to keep on doing it at my age, and that I’m still in a ring and I’m still able to go, at least to some degree.”

Has his faith stopped him from taking part in certain angles?

Sting has also had to adjust his diet and workout routine to ensure he can still go in the ring.

“I think the diet, that’s always the hardest part, and for me, sugar, I’ve got a sweetooth – I eat way, way too much sugar, so I had to cut back on that,” he said.

“I was in the gym every day this week. Every time I’m put into a satiation where I’ve got to work with especially a Bobby Roode, or a Kurt Angle, believe me, I’m trying to get that cardio in. I’ve got a trainer now that I’ve been working with for about three months and we’ve made some huge strides just trying to get more mobility, more flexibility in my movements and in my body, my knees, my back and the whole package. I’m training a lot differently now and I’m training a lot more consistent than probably I have in a long time – combined with eating the right way – and I think that last Thursday night I could tell there was a difference by the way I felt in the ring. I had lots of people, fans – including some of the wrestlers – make comments and I think even this week it’ll be better. The next eight weeks, 16 weeks, I’m hoping to get back to where I was 15 years ago.”

Despite more than a quarter of a century of experience, Sting still gets nervous about stepping in the ring. There was a period of time when his interest had waned, but with Slammiversary right around the corner, The Icon is more excited now than ever before.

“The last year-and-a-half or so, last couple of years, especially the last 12 months, there’s been like a something that has sparked in me and the interest is much higher again,” he said.

“My motivation is much higher, I’m having more fun now, I think, than I ever have, and just taking a risk, I’ll admit, changing my character up a little bit. Some people like it, some people don’t, but I think overall people enjoy watching it and so I love the people that we’re working with. Dixie Carter has been so good to work with, she gets better every single year, and I get just as nervous – a lot of fans don’t know this about me – but I’m still nervous walking through those curtains 25, 26 years later.” 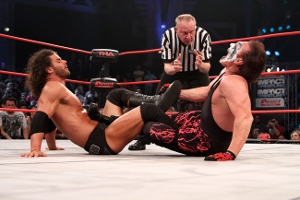 Sting labels his Slammiversary opponent, Bobby Roode, one of TNA’s next breakout stars, singing the praises of the reigning TNA World Heavyweight Champion.

“Bobby Roode, whether you love him or hate him, or you’re indifferent, brings it every single night, looks the part – he can work with anyone, he can have a great match with anyone, and I think he carries himself well. I have personally pushed to keep him where he is and so I’ve bought into him and I think there’s some good proof that we’re all witnessing it now.”

Sting first wrestled Roode at Victory Road earlier this year, losing to the champ in a non-title match.

“I think this one [match] coming up at Slammiversary… I think that I’m physically better off,” he said.

“I think I’m more mentally prepared, physically prepared, and more on top of my game than I’ve been in a while, so I’m hoping to make it really good.”

Also at Slammiversary, TNA will induct the first person into its Hall of Fame.

“I can tell you that there’s some people saying ‘oh Sting, it’s gotta be you’ and I’m saying ‘are you kidding me? No it does not, it should not be me’,” Sting said.

“There are so many other wrestlers who carried the TNA banner long before I got there. We’re talking about great, talented people who were there long before me. And some of them are still here. If you’re going to give it to somebody who’s still working you better talk about someone like AJ Styles. How about a Jeff Jarrett? So many people who played an integral part in the making of TNA long before I ever got there, so those guys need to be acknowledged way before me.”