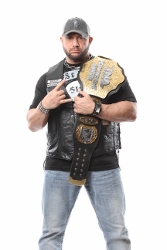 The outspoken Aces & Eights President, who will defend his title in a No Holds Barred bout with Sting at Slammiversary today, says a match with his father-in-law will get the wrestling world talking.

“After I defeat Sting at Slammiversary I want Hulk Hogan in the ring,” Bully Ray told a media line-up this past Thursday.

“I don’t care who sits back and goes ‘Oh, Hulk Hogan, he’s this or that – he doesn’t belong there’ at the end of the day people will be interested and they’ll want to see what happens.”

He didn’t grow up “a little Stinger or Hulkamaniac” but Bully Ray was a fan of Hogan and Sting’s work, which makes his potential clashes with the two icons significant from a personal standpoint.

“It’s cool [to wrestle Sting] I won’t downplay it at all,” he said.

“Sting was at the forefront of the NWA and WCW, so whether I wanted to see Sting or didn’t want to see Sting he was always there as the top guy.

“To be able to stand across from him knowing that he’s always been a top guy … and knowing how hard he’s going to come after me after I screwed him over, you’ve got everything there that you need for a great main event.”

While Bully Ray is keen to put over the accomplishments of his rivals, he too has had a high level of success.

The reigning TNA World Heavyweight Champion had no desire to be a singles competitor when he broke into the business in 1991; tag team wrestling is Bully Ray’s first true love.

“I always loved tag team wrestling and I always thought that a wrestling match could be so much more exciting with four guys as opposed to two,” he said.

“Before I got into the business I knew that I wanted to be part of a tag team, I wanted to have a successful legendary tag team that people were going to talk about forever … that was my goal, and I believe that me and Devon accomplished that goal.

Bully Ray and Devon’s names are still being mentioned side-by-side even though the two are now singles competitors.

As the Aces & Eights President and Sergeant at Arms respectively, Bully Ray and Devon bring their tag team experience – and experience getting audiences riled up – to the faction.

“To generate the amount of disdain that we do among people, the sky is the limit,” he said.

“You don’t get a lot of organic response in the wrestling world any more, it’s a lot of canned response ‘I should boo him and I should cheer him,’ that’s not what you get with me, and not what you get with us. I can’t speak for all of the other guys but I can definitely speak for me and I know I can speak for Devon:You will never get that with us. If you hate us you will hate us with every last breath in your body, and if you love us you’re going to love us ‘til the end.”

When it comes to being loved or hated Bully Ray would prefer to garner hatred from TNA crowds.

Honing his skills as a heel in ECW, getting back to his bad-guy roots was part of the motivation for his move to singles wrestling.

“My goal was to see how close I could get to the original version of me … that very edgy character, that in your face guy who I knew could be the most hated guy around, and is,” he said.

“I’ll put Bully Ray up against anyone when it comes to being the most hated. Nobody spits venom like I can on a mic – that’s not me just saying it, that’s fact.

“The whole evolution has been very interesting because I just wanted to see how far I could go when we first split up and how many people I could piss off.”

Being World Heavyweight Champion is not all crowd-interaction and getting on people’s nerves, there is significant pressure to deliver in your performances, says Bully Ray.

“In a tag team match if something’s going wrong, if you need a break, a breather, you can always look to your partner and tag out.”

Bully Ray will go it alone on today’s pay-per-view though, one-on-one with Sting, No Holds Barred, for the World Heavyweight Championship.

If Sting loses the match, he will be unable to challenge for the TNA World Heavyweight Championship again.

TNA Slammiversary is available from tnaondemand.com.