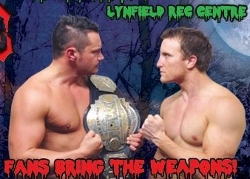 After fighting his way back to the top of the IPW food chain, Travis Banks will finally get his chance to fight for a championship he never lost.

Nightmare Before Xmas is one of IPW’s showcase events, and features the marquee Fans Bring the Weapons match. In this hardcore-style match, the wrestlers can pick and choose their tools of destruction straight from the fans’ hands.

Vinny Dunn is the current IPW Champion and will defend his title in the match against Banks. However, Dunn is no rookie to the unpredictable match, competing in his fifth this Saturday.

Dunn spoke to NZPWI late last week: “For me, Fans Bring the Weapons is the Mecca and the marquee match here in New Zealand professional wrestling.”

He went on, “This is the one match where you are going to get really badly hurt. You’ll jump off things, you’ll get hit with foreign objects. These fans, they dream up and bring these crazy weapons along, and we hit each other with them. It’s a crazy, amazing match, and I wouldn’t be human if I didn’t say that I was a little worried.”

However, this match has also gotten personal quickly. Banks has stated that he can overcome anything to get his title back, while Dunn said Banks “left [IPW] high and dry … to go and wrestle in some little gym in front of five people in America.”

As far as Dunn is concerned, Banks “thought he was better than us”. This is despite the fact that Banks worked his tail off to become what many thought would be the final IPW Champion, and then went on to spread the talent of New Zealand professional wrestling throughout the USA.

Banks and Dunn may have some severe differences of opinion, but the two are sure to put on a clinic this Saturday, especially if Dunn’s friends, Tykade and IPW Head of Live Events Steve Wrigley, keep out of the match.

The tag team championship will also be up for grabs when former champs TnT take on the Agents of Change.

The feud between these teams heated up at Right to Reclaim, when a masked TnT defeated the current champs, proving their ability to win and their right to fight for the titles.

IPW Nightmare Before Xmas takes place this Saturday, December 7, at the Lynfield Recreation Centre. Click here for a map. Doors open at 6.30pm with the first match scheduled for 7pm. Tickets are available at the door ($15 for adults, $8 for children). The card, subject to change, is listed below.

NOTE: Fans are encouraged to participate in the Fans Bring the Weapons match by bringing their own instruments of destruction to the event. Fans are advised that they bring items to the show at their own risk and that fans bringing anything deemed to be excessively dangerous or likely to be deemed illegal under New Zealand law will not be permitted to enter with those items. IPW will not bear responsibility for the safe carriage of any offending items.