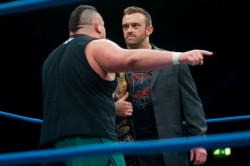 Magnus on being the last match on the Lockdown card: “I think it makes our job more difficult, but I don’t think either of us look at it from the standpoint as being something we don’t want to be involved with. It forces us to think a bit harder and to think outside the box as to what we’re going to do to send those people home happy.”

Magnus on how his life changed since becoming TNA World Champion: “Obviously there’s a lot more responsibility on every level when you have the championship, such as things like this conference call and the media responsibility – I tend to try and say yes to everything because I believe that to be the responsibility of the championship – and just the workload, but with that comes more reward. There are times when you sit back and you think, ‘I wish I had an easy day’ but you have to remind yourself this is what you got into the job to do.”

Magnus on being the first British world champion: “The fact that I was the first British guy to win a recognised world championship was not something I thought about because I wasn’t aware of it until people started bringing it up when I was coming close to winning the title. I’d never thought about it. I’m very proud of where I’m from but I’m not overly patriotic, for me it’s always just been about me trying to reach the top of the business. I’ve never really thought, ‘I’ve got to do it for the Brits’ or anything like that. I will say that I was very pleasantly surprised and impressed with the amount of coverage that it got within the UK for that reason that I was the first Brit. Then it meant more to me. That’s something that will always be the case, I’ll always be the first, and that’s a good feeling.”

Magnus on the relationship between TNA and Wrestle-1: “I love the way that they present pro wrestling over there. The press conference before the show and the professionalism of the whole unit is refreshing and exciting. It’s something new and just gives a different credibility to what we do as athletes. The show was great, all of the TNA crew who flew over there worked incredibly hard, and I think a lot of people perhaps silenced their critics as far as their range is concerned, especially the BroMans who tore the house down in the tag match and stuff with that. I was very impressed with my opponent, KAI, I was very pleased with the way the match went. I think everyone worked hard and I think it’s going to be the first of many, hopefully.”

Joe on the relationship between TNA and Wrestle-1: “The concept behind Wrestle-1, it’s very, very different to the traditional Japanese promotion, it’s more on the fly. It was a very interesting product and I was kind of caught off guard by the style that Mutoh was trying to put forth in Japan. It’s a very, very promising company and I think the relationship between Wrestle-1 and TNA is going to be a beneficial one for both companies. I look forward to returning to Japan.”

Magnus on television ratings: “None of the television shows of today, even the bigger hits, get anywhere near the numbers that the record shows of the 90s and the earlier periods got just because there’s simply more choice. As far as our genre is concerned, with on demand and things of that nature the landscape’s changed. I think sometimes we look at the raw numbers and go, ‘There’s nowhere near as many people watching’, but I think that we’ve become more of a global genre.”

Joe on being a locker-room leader: “If anybody wants to come up to me and ask me a question I’m never above that, and making myself available to be consulted – I think that’s just a trait of somebody who’s being a decent individual, not necessarily a leader.”

Magnus on appearing disgruntled on television: “Sometimes a lot of the wrestling media, and I use that term loosely, they want to find something deeper than there actually is. They want to find some motivation behind things – is he doing this because he’s upset with his creative direction, or are they making him do that because he has heat – and most of the time there’s nothing there. There is absolutely no basis to it other than this is what they decided to do. It’s frustrating where there’s that implication there’s a deeper level to it when there’s not. We’re making a two hour movie every week and we have a day to put it together and execute it. We’re just entertaining and we do it in the best way we can. If it comes across as realistic, great, I’m glad you think so.”

Magnus on the newer members of the TNA roster: “I still think of myself as a new, young talent trying to earn my place every week. Then there’s the very established stars like Joe and like Bobby Roode, like James [Storm]. The secure ones, the ones who are secure in themselves and their character and their popularity with the fans, they’re looking forward to it, they’re licking their chops at the idea of a whole fresh batch of match-ups and people to sink their teeth into. That’s what being a good pro is, and that’s the way we’re all starting to talk about it now, there’s just so many more options now, there’s a lot more versatility on the roster and there’s a lot more energy.”

TNA Lockdown is held live today in Miami, Florida, and will be available to rent in New Zealand tomorrow, March 11, from the Impact Wrestling YouTube channel.