by Leighton Cox
in Blog
2

Your benevolent editor David Dunn has kindly allowed me to contribute a guest blog on the recently relaunched NZPWI. For those of you who are newish around these parts, I was a regular columnist on this site from about 2002 until 2007, when my waning interest in the direction WWE was heading in led me to call it a day.

As a reference point, 2007 was when Bobby Lashley had a WrestleMania “main event” (although it wasn’t last on the card) against Umaga. Bobby Lashley! What the heck was going on there? Seven years later, Umaga is sadly no longer with us and Bobby Lashley, whilst still alive, is mainly just used as a name-drop when aging wrestling writers want to demonstrate how long ago 2007 was.

So what’s changed since then? I still haven’t rekindled my fandom of the current WWE product, but the advent of retrospective DVDs, YouTube, and podcasts have allowed me to remain a fan of wrestling. I would particularly recommend The Steve Austin Show and Jim Ross’ The Ross Report podcasts (both available for free on iTunes every week) for those like me whose greatest wrestling memories can now be measured in how many decades ago they occurred.

For me, one of the most exciting wrestling developments of recent times has been the announcement and launch of the WWE Network. In terms of content availability, the WWE Network really is the culmination of the tape library that WWE has been steadily acquiring over the years. Technologically, it is a giant leap into the future while most major entertainment entities remain firmly rooted in the dying mediums of network television and “multi-channel” subscription-based pay-TV services. While the initial uptake of WWE Network in the States hasn’t been as good as hoped, I remain optimistic that the innovation will win out in the long run and lead to an overall change for the better – both for WWE and for us as fans. I’m very much looking forward to the launch of WWE Network in New Zealand (hopefully early next year).

But as good as the wealth of old content available on WWE Network will be, no company can solely rely on past glories. New content is the name of the game. A “traditionalist” might argue that new content on a professional wrestling network should take the form of a professional wrestling show. Those people would be absolutely correct. But remember, we’re talking about WWE circa-2014, where “wrestling” is a dirty word and the emphasis is firmly on the “E”. They know that what wrestling fans really want isn’t wrestling, but low-rent vapid reality TV starring wrestlers/“superstars” (Total Divas, I’m looking at you).

One of the things I’ve spent a lot of time doing since 2007 is downloading and listening to old editions of The Ricky Gervais Show, a radio show which ran between 2001 and 2005 on local London alternative rock station XFM. As the title suggests, the show starred Ricky Gervais (The Office, Extras), as well as his writing partner Stephen Merchant and producer Karl Pilkington. Karl Pilkington’s unique ideas and stories of bizarre life experiences led to him becoming a break-out comedy star, and he was most recently seen on TV’s An Idiot Abroad and The Moaning Of Life.

Why am I telling you this? Well, one of my favourite moments on The Ricky Gervais Show was the time that Karl shared some of his ideas for new segments. Unusually, Karl’s method of coming up with new ideas involved first coming up with the title (usually a pun on a well-known expression or an existing television show), and then deciding what the segment would be based on the title. This led to such quickly-shot down ideas as “Big Mother” (a play on Big Brother), which was to be a competition in which listeners “would call in, and if your mum’s heavy you win a CD”. That proposal didn’t last beyond the obvious follow-up question of “How can you prove that?” but the general approach was sound.

This made me wonder whether the same approach would allow me to come up with pitches for new reality shows to feature on the WWE Network. Pick a title (preferably based on an amusing wrestling catchphrase or quote) and then work backwards to decide what the show will actually be about.

The below list is the product of my labours. I assert intellectual ownership over these concepts, but if anyone is interested in making them a reality then I’m more than happy to talk business – Hunter, call me.

Wade Barrett brings his “Bad News” gimmick out of the ring and into the real world. If there’s a happy event going on, Barrett will show up to impart some bad news and ruin the day. Wife-to-be cheating on her fiancé? Bad News Barrett will announce it to the world at the ceremony. And it’s not just weddings. Births, doctor’s appointments, graduations, anniversaries, birthdays – none are safe. It’s the ultimate in car crash television. So much of reality TV is based on the distress and emotional turmoil of strangers, and I’m Afraid I’ve Got Some Bad News brings the genre to its natural conclusion.

Think The Hotel Inspectors or that one where Gordon Ramsay goes around swearing at bad restaurateurs. Each week, WWE Chief Operating Officer Triple H takes a failing business, mentors the owner, and helps them try to turn their fortunes around by doing “what’s best for business”. However, just like the wrestling world, what’s best for business pretty much always involves restructuring the company in a way that is directly beneficial to Triple H and/or his close friends or family.

The pilot episode features a mid-sized accountancy firm which is losing clients hand over fist and can’t afford to pay its high inner-city office rent. Triple H’s solution? Push Batista to senior managing partner. Despite a prolonged and expensive public relations campaign, the business community fails to get behind this bold move, lobbying instead for someone who actually has some relevant qualifications and practical experience. But that’s not what’s best for business, sonny!

A few months later, the firm is shut down due to numerous professional negligence lawsuits arising from accounts which appear to have been signed off by someone with no knowledge of accounting whatsoever. Not to worry – Batista pockets his $400,000 per annum salary and moves onto greener pastures. And that’s just episode one! 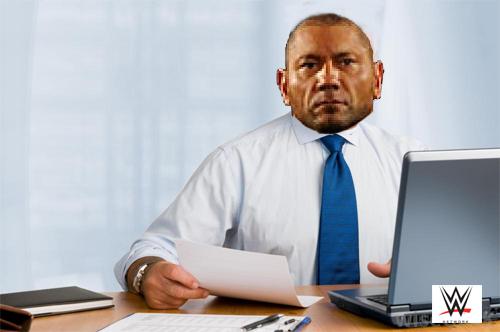 The WWE Network’s version of Judge Judy, only instead of an elderly Jewish lady with legal qualifications, the presiding judge is a 6’8, 300 pound goateed foot-fetishist (and former WWE talent) Gene Snitsky.

Judge Snitsky hears real-life civil legal cases ranging from minor car accidents to improperly designed buildings. The twist is that Snitsky is a defence lawyer’s dream come true. No matter how clear the evidence against the defendant, every episode ends with Judge Snitsky handing down his verdict: “That Wasn’t Your Fault”.

If the show is successful (as it inevitably will be), season two will see Judge Snitsky branch out into hearing criminal cases as well. The “infanticide” episode in particular will be a ratings bonanza.

Here we take a turn for the slightly more obscure. Those of you who have seen the fantastic 1999 wrestling documentary Beyond The Mat will already be well familiar with Dennis Stamp, but I’ll give a brief background for those who haven’t.

Dennis Stamp was a journeyman wrestler working out of Amarillo, Texas (hometown of Terry Funk) in the 1970s and 80s who shot to cult fame in Beyond The Mat by refusing to attend Terry Funk’s “retirement” show on the grounds that he was not on the card for the evening’s festivities. This culminated in an argument between Funk and Stamp which boiled down to them saying “but I want you there”, “but I’m not booked, Terry” for several minutes. In the end, Stamp was booked to referee the main event and they all lived happily ever after. Also, Stamp’s fitness regime was revealed to involve jumping on a trampoline in his underwear.

While Dennis Stamp was never a WWE superstar, he is the perfect fit as host of this new game show on WWE Network. Contestants are asked questions in which they have to identify who from a selection of wrestlers was not on the card for past major wrestling events. Questions range from easy to incredibly difficult. The easiest points come from the “Freebie Question” where one of the multi-choice options is “Dennis Stamp” (handy hint: “Dennis Stamp” is always the correct answer).

Each week’s winner goes home with a new trampoline and weight set. Because you never know when your next match is going to be. 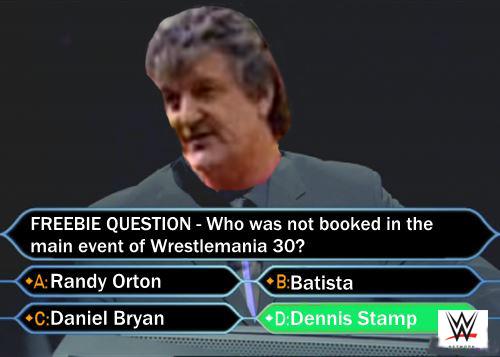 Even I can’t make that one sound good. Back to the drawing board.

Now I’m really scraping the barrel. The title for this one comes from a track from the atrocious 1993 record WrestleMania: The Album. The main claim to fame of this album is that it was produced by Simon Cowell back when he had the same poor taste that he does now but hadn’t yet refined his sense of what sort of crap people will buy by the truckload.

Track 3 is a patriotic ditty by “Hacksaw” Jim Duggan simply entitled “U.S.A”. The song plods along in much the same vein as the rest of the album (wrestlers shouting generic slogans over late 80’s Casio keyboard demo music) until at the 2:06 mark we get a piece of record scratching brilliance that makes you wonder why hip hop as a genre didn’t just pack it in on the spot: “Ha-hacksaw Jim Duggan b-b-beats people up!” Twenty-one years later, a reality show was born.

To make the show work, I’m going to have to use a bit of creative licence and have “Hacksaw” Jim Duggan develop a stutter. I know Bully Ray/Bubba Dudley already did that gimmick 20 years ago, but it’s an important plot point. Poor old Jim is socially ostracised as a result of his speech impediment, and deals with the trauma by committing random assaults on members of the public. These assaults are then filmed and put on television.

While this may be offensive to people who suffer from a stutter, as well as the victims of random assaults, we all know that reality TV cares not for taste and sensitivity. This show has the added benefit of being topical, as “king hit” videos have been a social media phenomenon in the last year or so (albeit a phenomenon amongst sociopaths and dropkicks, but a ratings point is a ratings point). Plus the theme song writes itself.

As good as this idea is, it runs the risk of getting stale fairly quickly. There are only so many times anyone can watch Jim Duggan commit random acts of violence before it becomes passé. To fix this, I propose that in the second season Jim Duggan will be replaced by “Rowdy” Roddy Piper. The title will stay the same, so the viewers will be expecting to see more assaults by Duggan. When Piper shows up and starts putting the boots to some poor unknown hero, the people will be like “What’s going on?!” With plot twists such as these, I predict that this show will enjoy a run comparable in length and quality to Two and a Half Men.

So there you have it. That’s five licences to print money right there. It’s times like these that I think I missed my true calling in life as a reality show pitch man. If you have got any ideas of your own for reality shows on the WWE Network, I’d love to hear them. Together, we can make a difference. Or maybe WWE Network should just stick to, you know, wrestling?

Imperium have overcome The Undisputed Era despite facing a four-on-three disadvantage. After being attacked at NXT UK TakeOver: Blackpool II,...